In this explicitly comparative work, Dorothy J. Solinger (UC Irvine) examines the effects of global markets on the domestic politics of major states. 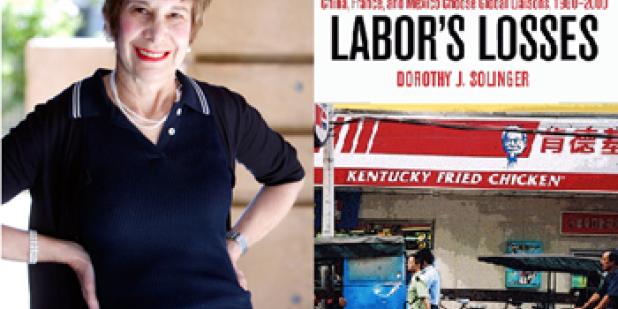 Professor Dorothy Solinger's field of specialization is Chinese politics with a concentration on political economy. In particular, she has focused on the political decision making and social and political reactions to policy about economic matters. She has written on regional policy and regionalism in China; the treatment of minority nationalities; the politics of socialist commerce, the treatment of the private sector under socialism in China, the politics of inflation control, and the politics of economic reform. She has also published more comparative studies, including industrial policy in China, with comparative reference to similar policy in Japan and France, and unemployment, protest and welfare in China, France and Mexico.
Dorothy Solinger has been a fellow at the Center for Chinese Studies, University of California, Berkeley, Visiting Research Associate at the Center for Chinese Studies, University of Michigan, National Fellow at the Hoover Institution, director of Regional Seminars on Modern China at the University of Pittsburgh (funded by the Joint Committee on Contemporary China of the American Council of Learned Societies and the Social Science Research Council), received grants from the Committee on Scholarly Communication with the People's Republic of China (funded by the National Science Academy) and the Chiang Ching-kuo Foundation (administered by the American Council of Learned Societies), and the Smith Richardson Foundation, was Fellow at the The Woodrow Wilson International Center for Scholars, Visiting Fellow at the London School of Economics, and was the winner of the 2001 Joseph R. Levenson prize of the Association for Asian Studies for the best book on 20th century China published in 1999 for CONTESTING CITIZENSHIP IN URBAN CHINA. She has done consulting work for the World bank, the Henry Luce Foundation, the Carnegie Council on Ethics and International Affairs, and the Public Broadcasting System, and was a member of the Editorial Board of the University of California Press. She also served as Chairman of the China and Inner Asia Council of the Association for Asian Studies, and, from 2004-06, she was Co-Director for the UC Irvine Center of Asian Studies