This workshop will discuss aspects of this change, and the economic, political, and social implication of Olympics-led urban renewal in Beijing. 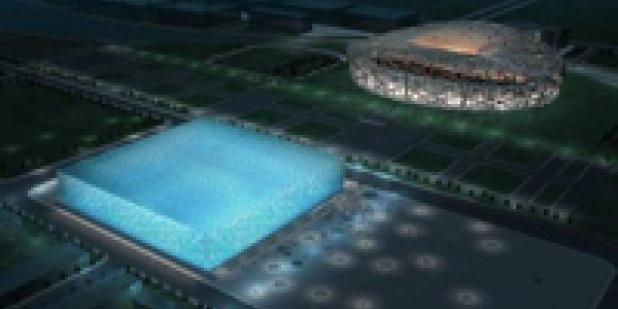 Planning for the 2008 Olympics has literally changed the face of Beijing.  Urban image, construction, event-led city marketing, the society of spectacle, and the civilizing process through city construction have radically transformed daily life and public perceptions of the capital. This workshop will discuss aspects of this change, and the economic, political, and social implication of Olympics-led urban renewal in Beijing.

"Building the Dream: The Making of Beijing’s Olympic Image"
This presentation addresses Beijing’s urban transformation in the context of the 2008 Olympic Games.  It examines how the Olympics have been instrumentalized to both legitimize and accelerate an important urban image construction program initiated in the 1990s, which sought to modernize the Chinese capital and change the global perception of the city and its inhabitants.  This paper investigates two main aspects of this beautification program, one focusing on the city’s physical landscape, the other one concerned with Beijing social-cultural image.  In many ways, the Olympics have allowed Beijing to reprioritize its urban agenda, turning the city into a model of event-led urban regeneration, and acting as a catalyst to fast track major infrastructures investments and redevelopment projects that strongly reconfigured the city.  The Games also facilitated the development of city-marketing strategies, with the construction of high-visibility iconic projects and neighborhood re-branding initiatives.  Simultaneously, the Olympics enabled the pursuit of a social reform and disciplining program, and hastened the civilization process that sought to turn Beijing residents into modern citizens.  Merging Olympic ideals with notions of a “harmonious civilization” in official propaganda eased state efforts to transform social behavior and reshape the body to fit global expectations of civility.  The Olympics also represent a powerful tool of pacification in a moment of rising instability, and dissidence, allowing diverging interests to unite around a great national endeavor.  Through a series of short case-studies, this paper assesses some of the social, cultural and economic impacts of these image construction programs, in terms of socio-spatial polarization, displacements and evictions, and loss of civil liberties and citizenship rights.  It also investigates what kinds of response these two programs have elicited, including diverse forms of resistance by different categories of actors within local society.

"From Property Rights to Residents’ Rights: Urban Construction and Grassroots Resistance in Beijing"
In this presentation I will focus on inner city residents’ resistance against forced eviction, inadequate relocation and unfair compensation under Beijing’s massive urban redevelopment projects since the early 2000s, especially the redevelopment projects initiated in the name of the 2008 Olympics.  I will analyze their framing of grievances, their strategies of mobilization, the transformation of their demands, and the political, social, and territorial implications of their mobilization.  I argue that as urban mobilizations evolved, the demand of narrowly-defined property rights by pre-revolution private homeowners was broadened into demands of urban residents’ social rights to the livelihood in the city.

"State- and Citizen-driven Nationalisms in Mega Sport Events: Comparison of the 1988 Olympics in Seoul and the 2002 World Cup Game between South Korea and Japan"
The Seoul Olympic Games played a significant role in political transformation, international relations and national development in South Korea.  Held in 1998 the Seoul Olympics had political and social impacts on Korean society, although its role in urban image construction and real estate development was not as fully manifested as it is in the case of Beijing’s 2008 Olympics.  The 1988 Olympics in Seoul was a part of the discourse of democratization in South Korea since the “June29 declaration.”  After the massive public uprising in 1987, the June29 declaration was made in order to reduce the possibility of jeopardizing the 1988 Olympics.  The declaration also paved the way for a direct presidential election after long military dictatorship.  The 1988 Olympics in Seoul helped South Korea show its economic success to the world.  It also served as a vehicle to establish economic and political connections with the post Socialist blocs.  The South Korean government also used the Games to mobilize citizens to “beautify Seoul,” and to be disciplined supporters and participants of the Games under the official discourse of “for the success of the Olympic.”  I call it a state-driven nationalism embedded in the 1988 Olympics in Seoul.  In comparison, the World Cup game in 2002 between South Korea and Japan could be seen as a citizen-driven nationalism shaping and was shaped by a mega sport event.  In many ways, the S. Korea-Japan Game was an even more explosive event, with a more profound social impact than the Olympics.  The citizen-driven nationalism manifested during the world cup game has a lot to say about the complex politics of nationalism and its varied and sometimes contradictory  discourses in the transformation of South Korea from the 1990s to the 2000s.