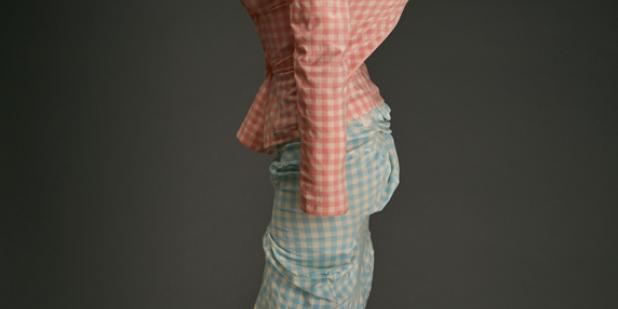 Works on view illustrate concepts such as the intersection of tradition and modernity; the influence of pop culture motifs; molding the body versus hiding the body with oversized shapes; reinventing the traditional Western representation of femininity; collaborations between contemporary artists and fashion designers; and other diverse ways of challenging the fashion system.

Emphasizing these elements, the exhibition will demonstrate how Japanese designers confronted the work of European designers during the 1980s (such as Jean Paul Gaultier, Anne-Marie Beretta, Azzedine Alaïa, and Thierry Mugler), while they inspired younger European designers (such as Martin Margiela, Helmut Lang, John Galliano, and Dries Van Noten) in the 1990s.

Shock Wave is the inaugural exhibition organized by Florence Müller, the Avenir Foundation Curator of Textile Art and curator of fashion, who joined the museum in 2015. It includes 20 recent acquisitions for the DAM’s collection and also spotlights important loans from the fashion collections of the Los Angeles County Museum of Art and the de Young Museum in San Francisco, as well as from local and national private lenders.

To accompany the exhibition, a 64-page catalog will be available in The Shop and online, and will feature many looks from the exhibition as well as the work of fashion photographers.

Shock Wave: Japanese Fashion Design, 1980s–90s, is organized by the Denver Art Museum. It is presented with generous support from the donors to the Annual Fund Leadership Campaign and the citizens who support the Scientific and Cultural Facilities District (SCFD). Promotional support is provided by 5280 Magazine, CBS4, Comcast Spotlight, and The Denver Post.