Secrets of the Silk Road

The Bowers Museum presents an historic exhibition of over 150 objects drawn from the rich collections of the Urumqi Museum and the Institute of Archaeology of Xinjiang reveals surprising details about the people who lived along the ancient Silk Road. 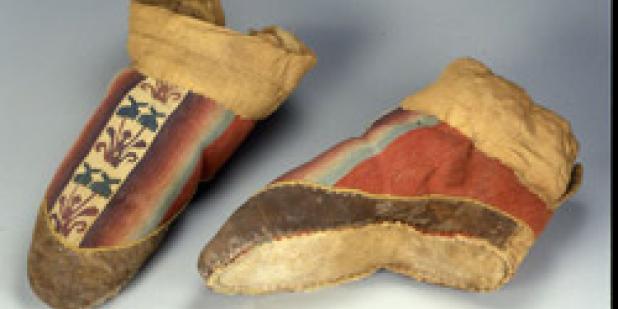 The much-anticipated exhibition, “Secrets of the Silk Road,” opens at the Bowers Museum on March 27, 2010.

This groundbreaking exhibit will be at Bowers through July 25, 2010, after which it will travel to the Houston Museum of Natural Science from August 28, 2010 to January 2, 2011, and then to the University of Pennsylvania Museum of Archaeology and Anthropology from February 5, 2011 to June 5, 2011.

This landmark exhibition features more than 150 objects relating to all aspects of the people and cultures of the Silk Road during its early period. The legendary trade route linked Xian, the then-capitol of China in the East, to major Mediterranean cities in the West such as Rome and Baghdad.

What sets this exhibition apart from other Silk Road exhibitions is the extreme age and superb preservation of the objects, some almost 4,000 years old.

These objects have been drawn from the collections of the Xinjiang Uyghur Autonomous Region Museum and the Xinjiang Institute of Archaeology in Urumqi, China.

This is the first time many of these treasures will be seen outside of Asia.

“The opportunity to see these priceless objects will enable visitors to gain a new perspective on the complex cultures and the rich trading crossroads that characterized Eastern Central Asia in ancient times,” says exhibition co-curator Victor Mair, Professor of Chinese Language and Literature at University of Pennsylvania.

“I have been engaged in intensive research on Xinjiang archaeology since the early 1990s and never dreamed that I would see the day when these invaluable ancient artifacts would come to the Americas. This exhibition will provide visitors with a unique opportunity to gain an appreciation of life in Eastern Central Asia both before and after the formation of the fabled Silk Routes in the late 2nd century BC.”

The discovery of the ancient exhibit objects along the Silk Road has helped historians better understand the settlement of ancient East Central Asia and has opened up a window to understanding the very early exchange of important technologies, life-improving inventions and ideas and customs being practiced in the inhospitable lands of the Tarim Basin where East meets West.

The “Silk Road” was aptly named because of the vast amounts of silk and other merchandise -- spices, gold, precious metals and stones, ivory, glass, exotic animals, furs, ceramics, jade, lacquer, iron and plants -- that were carried back and forth from East to West. Many goods were bartered for others along the Silk Road, and objects often changed hands several times.
The “secret” is that many of objects in the exhibit predate the known Silk Road by almost 2,000 years and they reflect a much more global population than previously realized.

For more on the exhibit, log on to www.bowers.org.

About Bowers Museum
Opened in 1936, Bowers Museum is an internationally-known institution of art and culture dedicated to the preservation, study, and exhibition of fine arts from around the world. To achieve its mission to “enrich lives through the world’s finest arts and cultures,” the Bowers offers exhibitions from many of the world’s greatest collections as well as insightful lectures, art classes, travel programs, children’s art and music education programs, and other community programs. The Bowers has organized many culturally significant exhibitions, including Terra Cotta Warriors: Guardians of China’s First Emperor, Secret World of the Forbidden City, Dead Sea Scrolls, Egyptian Treasures of The British Museum, and Tibet: Treasures from the Roof of the World.  The museum’s permanent collection is particularly strong in the areas of African, South Pacific, Asian, Native American, Pre-Columbian art, and California Plein-air painting.