Screening of the documentary film followed by Q&A with Joshua Wong, a student leader of Hong Kong's Umbrella Movement, and Matthew Torne, Director. 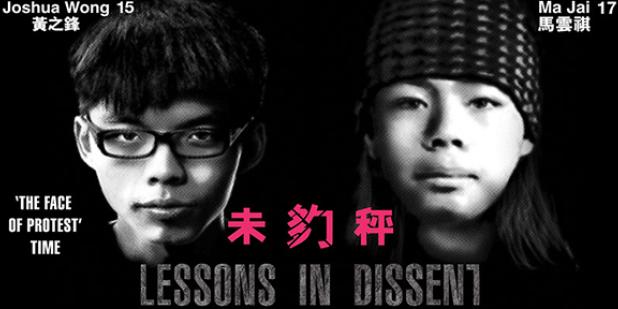 Lessons in Dissent catapults the viewer on to the streets of Hong Kong and into the heart of the action: confronting the viewer with Hong Kong’s oppressive heat, stifling humidity and air thick with dissent.

Over the course of the film Joshua goes from an unknown school boy campaigning against National Education on Facebook, to a media superstar and the leader of 120,000 protesters laying siege to the Hong Kong government’s headquarters.

Filming began before Joshua’s monumental rise to fame. Consequently, the filmmakers had unfettered access to Joshua enabling them to create the most complete study of an extraordinarily determined school boy and his group of friends as they established Scholarism.

Seventeen year old Ma Jai is representative of a new generation of socially conscious Hong Kongers. He and his friends eschew the materialism so prevalent in Hong Kong, reject the harsh zero sum game demanded by the ‘freest economy in the world’ and renounce the crony capitalism that dominates Hong Kong’s political system.

A former school mate of Joshua’s, in 2010 Ma Jai dropped out of school and dedicated himself to social activism. After flirting with the Civic Party and FM101, he finally settled at the ‘radical’ pro- democracy political party the League of Social Democrats.

Unlike Joshua, he is intensely shy and shuns the media spotlight. But, he is passionate about social issues and making a difference. He works tirelessly behind the scenes doing the unglamorous, but essential, work needed to make social activism successful.