Reporting on China - A US-China Today Panel and Networking Night

USC US-China Institute director Clay Dube will ask Julie Makinen of the L.A. Times, Jonathan Karp of the Asia Society, and May Lee of CCTV what it takes to report on complex and ever-changing China. 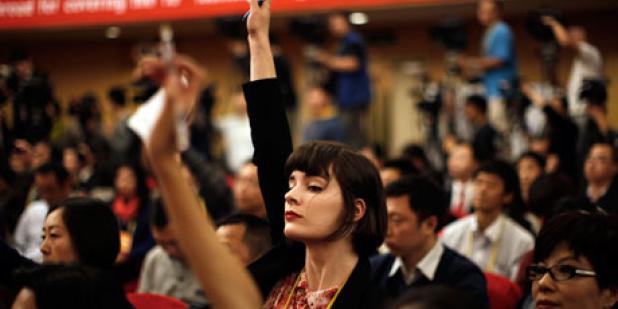 Don't miss senior China correspondents and national reporters share their experiences reporting on China. USC US-China Institute director Clay Dube will ask Julie Makinen of the L.A. Times, Jonathan Karp of the Asia Society, and May Lee of CCTV what it takes to report on complex and ever-changing China. A must-attend for budding foreign correspondents and anyone with an interest in China.

As Beijing bureau chief for the L.A. Times, Julie Makinen chronicled democracy protests in Hong Kong and the plight of earthquake victims in Nepal. She is on the board of the Foreign Correspondents' Club of China, and is chair of its Media Freedoms Committee, which tracks and publicizes Chinese government efforts to restrict coverage of certain topics by threatening, harassing, and intimidating foreign journalists. She recently completed a Knight Journalism Fellowship at Stanford University.

After graduating with a degree in Middle Eastern history from Princeton University, Jonathan Karp started his career as foreign correspondent with Reuters in Israel. His reporting has taken him to Hong Kong with the Far Eastern Economic Review and India with the Wall Street Journal. Today, he leads Asia Society Southern California and remains close to China with their annual U.S.-China Film Summit.

A second generation Korean American, May Lee faced gender discrimination and anti-Asian bias early in her career, and spent the 1980s moving between local broadcasters. In 1995, she joined CNN and worked as a correspondent in Tokyo and Hong Kong, and later became the network's first female anchor of Korean descent. She also worked in the Asia-Pacific region as an anchor for The Asia Wall Street Journal and CNBC. She became the L.A. correspondent for CCTV-America in 2014.

An information session about joining US-China Today will follow at 6pm in ASC G24.

About US-China Today
US-China Today is a student-driven publication of the USC U.S.-China Institute. Like the Institute, the magazine focuses on the multidimensional and evolving U.S.-China relationship and on significant trends in contemporary China. The magazine offers coverage of and commentary on a wide range of political, economic, social, and cultural issues.
US-China Today is a non-partisan publication. We offer carefully reported feature stories that we work to make accurate, balanced, and compelling. In our commentary section, we seek to offer the views of scholars, journalists, businesspeople, agency and non-governmental specialists, and policy-makers. The views expressed in such essays are those of the authors and are not necessarily shared by the staff of US-China Today or the U.S.-China Institute.
美中今日是一个由南加州大学美中学院主办、在校学生协办的网络刊物。正如美中学院一样，这份网络杂志致力于从多个角度对中美关系的发展进程和当代中国的重要发展趋势进行思考，它的报道与评论囊括了包括政治、经济、社会、和文化在内的多个领域。