Renwen Lecture: Huizhou and Its Role in Sino-American Cultural Exchange

The China Institute hosts a talk on the history of Huizhou and its impact on Sino-American culture since World War II. 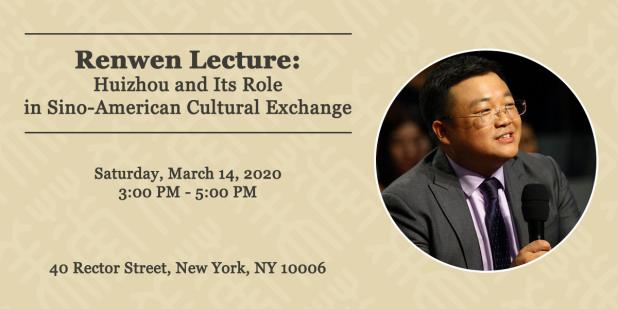 The city of Huizhou, located between Yellow Mountain and Mount Qiyun, is known for its merchants and scholars such as Zhu Xi, Dai Chen, Hu Shih, Tao Xingzhi. It leaves an imprint on China’s history of commerce, philosophy, and culture.
Huizhou, wedged between mountains, is neither a harbor city nor one of connecting trade routes, yet it played an important role in Sino-American exchange in the modern era: the first Chinese scholar to lecture in Harvard, Ge Kunhua was from Huizhou, Xiuning county; pioneer of the New Culture Movement, ambassador to the U.S. during World War II, Hu Shih, has deep ties with Huizhou, Peking University, and Columbia; Huizhou scholar in public education, Tao Xingzhi incorporated the education philosophy of John Dewey and the Chinese classics into practical reform, etc. At the start of the 21st century, an old house in Huizhou, Yin Yu Tang, found its home in Salem, Massachusetts as an important artifact at the Peabody Essex Museum.
This lecture focuses on Huizhou as a connection point and recounts the moments it made an impact in Sino-American history.
The speaker Wu Hao is a professor and executive director of the Institute of Silk Road Studies of Beijing Foreign Studies University.
(Photo\China Institute)
Event Website URL:
https://www.chinainstitute.org/event/lecture-huizhou-role-sino-american-cultural…