Renwen Lecture: The Chinese Shadow Puppetry in the US - A Centennial Story

The China Institute hosts a talk on the history of Chinese shadow puppetry within the United States. 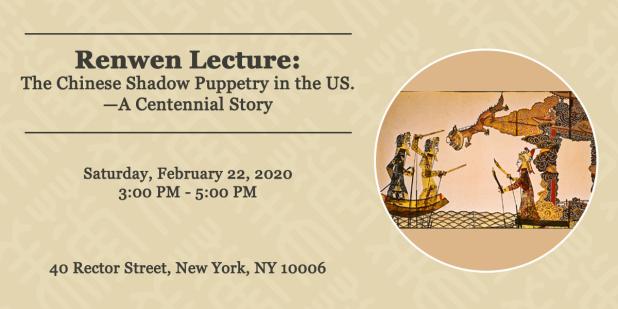 The Chinese shadow puppetry is a traditional Chinese folk art. In 2011, it was added to UNESCO’s list of intangible cultural heritage of humanity. Throughout the 20th century, Americans continued to perform Chinese shadow puppetry and improvised at the same time. This is a centennial legend worth remembering, particularly when the story is linked with the life stories of a man and three women.
Chinese shadow puppets were brought to the United States by Dr. Berthold Laufer (1874-1934) in 1904. Ms. Pauline Benton (1898-1974) founded the “Red Gate Shadow Players” in 1932. She was the first and only foreign artist to perform Chinese shadow puppetry at the time in the United States and the rest of the West. She was invited to perform at the White House and performed at benefit events many times for the Anti-Japanese War. After Ms. Benton’s death, some of her shadow puppets were gifted to Ms. Jo Humphrey, who subsequently founded the “Yueh Lung Shadow Theatre” in 1976 to perform traditional Chinese shadow play until her retirement in 1999. Afterwards, all the shadow puppets were passed to the “Chinese Theater Works” founded by Ms. Kuangyu Fong in 1995, performing cross-border, cross-cultural original repertoire to date.
The Chinese shadow puppetry and its continued life in the United States is valuable, because it is a living heritage. This history not only provides rare typical cases for the study of intangible cultural heritage around the world, but also shows the universal value of Chinese civilization and its ethical values, as well as the significance of art and beauty for all people.
At this lecture, Professor Li Mingjie of the Folklore institute at East China Normal University (Shanghai, China) will relate this history. After more than three years of research she has restored the links and is acquainted with the entire story. The documentary “Chinese Shadow Play” recorded by Mr. Wango Weng in 1947 and performed by Ms. Benton named “The White Snake Lady ” will also be presented. Ms. Feng, director of “Chinese Theater Works”, will also attend the lecture with some of the actually puppets seen in the film made by Ms. Benton and handed down by Ms. Humphrey.
(Photo\China Institute)
Event Website URL:
https://www.chinainstitute.org/event/lecture-chinese-shadow-puppetry-us-centenni…