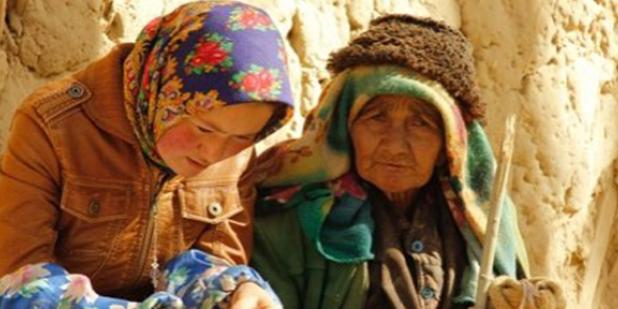 This is the first known independent Uyghur documentary for public screening by a native Uyghur film maker about Xinjiang entirely without government background or involvement.

Qarangghu Tagh is an impoverished mountain area near Khotan in the southernmost part of Xinjiang. The villages are situated on high mountains at altitudes above 3000m. The area is so remote that it has no road connecting it to the world outside. Even to this day, the only access to Qarangghu Tagh is a long, narrow and meandering mountain path that takes 8-9 hours on donkey back, or 3-4 hours by motorbike to get through. One might expect such a self-subsistent community so isolated from the rest of the world to be left in peace.

However, history of the larger world has not left Qarangghu Tagh alone. In 1934 the army led by the Tonggan (Hui) warlord Ma Hushan was defeated in battles fought out in Xinjiang by the army of Sheng Shicai, the Han warlord from Liaoning Province recognized by the Kuomintang. Ma’s soldiers retreated to Khotan and inaugurated four years’ of brutal rule in Khotan. The people of Khotan were subjected to atrocious killing and looting. Some of Ma’s soldiers went up the mountain to Qarangghu Tagh and committed a massacre in one of the villages. This event that destroyed the world of the ordinary people of Qarangghu Tagh is not written down in any historical records, but the people of Qarangghu Tagh have remembered it in a folk song that everybody in the village can sing.

During the 1934 massacre, the unfeigned and mild folks of Qarangghu Tagh did not put up any resistance because the simple lives of rural living had not occasioned the training of strong leaders. Today, after more than half a century, education in the village is still barely existing.

The director-cinematographer of Qarangghu Tagh is a native Uyghur of Xinjiang. He travelled to Qarangghu Tagh for the first time in 2009 to observe the people’s way of life. It was in that trip when he first heard villagers sing the folk song about the 1934 massacre. Then he started to research on that incident and returned to Qarangghu Tagh multiple times between 2009 and December 2012 to interview villagers including survivors of the massacre and their descendants.  He worked alone on most of the research and creative tasks within a minimal budget and other social constraints. He is the director, researcher, cinematographer and co-editor of this film. It took him six years until 2014 to complete this project.

Muhter is a good boy. He helps his father pushing his hawker’s cart in the morning before school. In the afternoon he helps his mother with the baby. His only vice is ice-lollipops. One day while he is taking his grandmother home, he finds a donkey-pad which he sells to finance his purchase of a lot of ice-lollipops. However, life becomes complicated for Muhter…

Bogha is adapted from a short-story of the same title by the Uyghur writer Memtimin Hoshur.

About the filmmaker
Saipulla Mutallip is a native Uyghur of the Bortala region of north Xinjiang. He was born in 1983 and graduated in 2006 from the Xinjiang Arts Academy Photography Class in Urumqi. After graduation he joined the film industry working as cinematography assistant and lighting assistant for local, Chinese and Hong Kong film crews when they shot films in Xinjiang. He also worked in international film crews such as those of The Kite Runner and Mummy III during their Xinjiang shoots.