One Country, Two Cultures: Can Hong Kong Find Its Way?

The China Institute hosts a talk on the future of Hong Kong as a part of China, and as a world financial center. 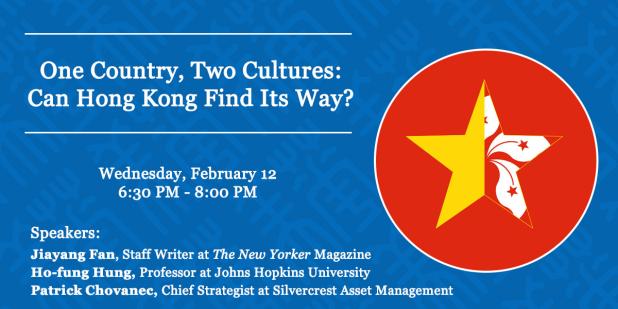 What is behind the upheaval in Hong Kong? Today, 23 years after China committed to abide by “one country, two systems” in the former British colony, more young Hong Kong people identify themselves as “Hong Kongers” rather than as “Chinese.” A massive protest movement is raising questions that strike at the very core of the city’s cultural and political identity. What does it mean to be a “Hong Konger,” what is at stake for the city’s citizens, and what could a newly politicized Hong Kong mean for the city’s future as a world financial center? Johns Hopkins Professor of Sociology Ho-Fung Hung joins New Yorker writer Jiayang Fan in an exploration of history to understand what is to come.
Speakers’ Bios
Jiayang Fan is a staff writer at The New Yorker magazine, where she writes about China and Chinese-American politics and culture. Her work has also appeared in The New York Times Book Review, The New York Times Magazine, and the Paris Review, among other places. Ms. Fan was born in Chongqing, moving to the United States at the age of eight. She graduated from Williams College with a double major in philosophy and English literature. Her latest reporting about Hong Kong appeared in the New Yorker in December: https://www.newyorker.com/magazine/2019/12/16/hong-kongs-protest-movement-and-the-fight-for-the-citys-soul
Ho-fung Hung is the Henry M. & Elizabeth P. Wiesenfeld Professor in Political Economy at the Sociology Department and School of Advanced International Studies of Johns Hopkins University. He is the author of the award-winning book The China Boom: Why China Will Not Rule the World and Protest with Chinese Characteristics: Demonstrations, Riots, and Petitions in the Mid-Qing Dynasty, both published by Columbia University Press. His articles have appeared in American Journal of Sociology, the American Sociological Review, Development and Change, the New Left Review, the Review of International Political Economy, Asian Survey, and elsewhere. His analyses of the Chinese and global political economy and Hong Kong politics have been featured or cited in The New York Times, The Financial Times, The Wall Street Journal, Bloomberg News, BBC News, The Guardian, Folha de S. Paulo (Brazil), The Straits Times (Singapore),  Xinhua Monthly, People’s Daily, among other publications.
Patrick Chovanec is Managing Director and Chief Strategist at Silvercrest Asset Management and an Adjunct Professor at the Columbia School of International and Public Affairs. He previously served as Associate Professor of Practice at the Tsinghua University School of Economics and Management in Beijing, China. He was Director of the Asia-Pacific Institute and the Global Fixed Income Institute for Institutional Investor Magazine, Founder and Publisher of Public Things Magazine, and Editor-in-Chief of Legislative Digest for the U.S. House of Representatives Republican Conference. Chovanec received a BA in Political Economy from Princeton University, and an MBA from the Wharton School at the University of Pennsylvania.
This program is supported, in part, by public funds from the New York City Department Of Cultural Affairs in partnership with the City Council.
(Photo\China Institute)
Event Website URL:
https://www.chinainstitute.org/event/one-country-two-cultures-hong-kong-came/