The UCLA Center for Chinese Studies presents a talk by Wang Chao from the China National Academy of Art and David Barker from Muban Educational. 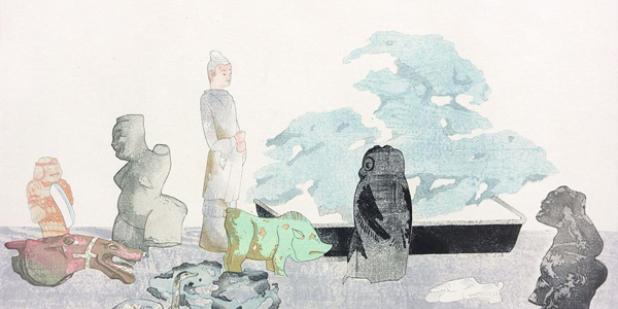 During the late Ming (1368–1644) and early Qing (1644 to 1912) dynasties, consumer demand for the printed word and image increased as merchants and scholars sought to display their taste in drama, poetry, literature, and art. Gardens also were central to a cultured life, appearing frequently in woodblock prints. Several centers of printing around the lower Yangzi River delta grew in reputation during the last decades of the Ming dynasty, and a golden age of Chinese pictorial printing began. Work made during the woodblock printing golden age (late 16th through 19th centuries) feature delicate works with painterly textures and subtle colors depicting plants, birds, and other garden elements alongside monumental accounts of sprawling, architecturally elaborate “scholar’s gardens.”

Wang Chao王超 is associate professor in the Print Department of China Academy of Art, Hangzhou. He entered the China National Academy of Fine Arts in 1994, graduating with a Bachelor’s degree in 1998 and a Master’s degree in 2007 with a specialty in woodcut printmaking. He is currently the deputy-professor responsible for The Purple Bamboo Studio. His works have been exhibited and collected internationally.

David Barker is a graduate of Goldsmiths', University of London 1961-66. He studied Chinese at the People's University, Beijing and at Leeds University in the 1980s. He retired from the post of Reader in Printmaking at the University of Ulster in 2005, to take up the voluntary post of Secretary to the Trustees, The Muban Educational Trust 2005-2015. He is currently the Senior Research Fellow in the Muban Educational Trust 2015. His work includes many books and journal articles published in the UK, USA and China. He is currently working to complete a Chinese-English-Chinese Glossary of Woodblock Printmaking Terms. He is Honorary Professor of Printmaking in the China Academy of Fine Arts and a Member of their International Exchange Committee.