Modernity in Tradition, Tradition in Modernity: The Contemporary Legend Theatre from Taiwan 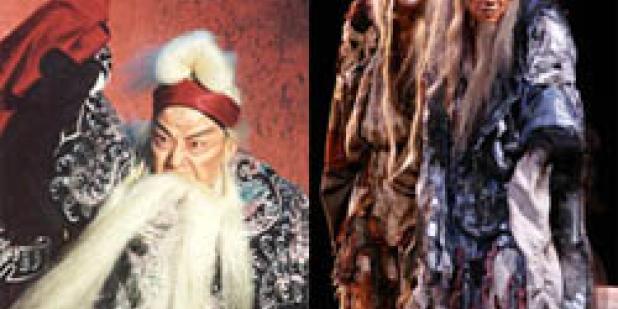 The Contemporary Legend Theatre (CLT; 當代傳奇）, one of the most celebrated performance troupes in Taiwan today, was founded in 1986 by Wu Hsing-kuo, a traditionally trained Beijing opera performer. Searching for new forms of theatrical expression, Wu started experimenting with productions of Shakespeare featuring Beijing opera techniques and methods of modern staging. The first production, The Kingdom of Desire (an adaptation of Macbeth) in 1986, with Wu as Macbeth and Wei Hai-min as Lady Macbeth, was a great success. In 1996, Wei Hai-ming, a famous Beijing opera actress of the Mei Lanfang school (梅派), received the Plum Flower Award, the highest honor for Beijing opera actors.

The company has staged both adaptations of such classics as Tempest, King Lear, Medea, and Oresteia (a collaboration with Richard Schechner, in the style of environmental theatre), and modern plays such as Waiting for Godot. It has toured many countries and won many awards. In CLT's performances, traditional Beijing opera techniques heighten the theatricality of Western classics, while modern staging methods and multimedia techniques enrich the tradition of Beijing opera. Wu Hsing-kuo, the founder and artistic director of the Contemporary Legend Theatre, believes that to make traditional topics more meaningful they must be given not only a change of style, but also a new spirit, new thinking, and new attitudes that reflect contemporary society. CLT is one of the most successful troupes of intercultural theatre.

During its California tour in May 2007, CLT will perform two traditional Beijing opera pieces, Farewell My Concubine (霸王別姬) and The Drunken Beauty (貴妃醉酒) featuring Wei Hai-min, and a solo piece, Lear, by Wu Hsing-kuo. The lecture and demonstration at UCLA will feature Wu Hsing-kuo (the artistic director), Lin Hsiu-wei (the producer), Wei Hai-min (the leading female performer) and Hsu Ching-chi (the orchestra director). They will demonstrate sections from Beijing opera and discuss issues related to contemporary theatre, such as the negotiation between modernity and tradition in theatrical expression.

WU Hsing-kuo, Artistic Director of the Contemporary Legend Theatre, studied at the Fu-Hsing Chinese Opera School and specialized in wu sheng (male martial roles) and lao sheng (middle-aged or old male roles). He received his BA from the Theatre Department at the Chinese Culture University. Since 1973, during his university years, he was a leading dancer with Cloud Gate Dance Theatre. After his graduation in 1977, he became a member of Lu-Kuang Chinese Opera Company. Wu playedg a wide variety of roles, and was awarded the Military Golden award for best actor three times. He received a grant from the Council for Cultural Affairs and a Fulbright Scholarship to study in New York in 1992.

Wu has also acted in films, playing the leading roles in Ho Ping's Eighteen and Tsui Hark's Green Snake. Wu won the 1994 Hong Kong Film Award as best new actor for his role in The Temptation of a Monk directed by Clara Law.

Wei Hai-min, a famous star from Taiwan's Hai-Kuang Chinese Opera School, has performed in more than one hundred Peking operas over the last twenty years.

Wei was awarded a National Outstanding Youth Award in 1989 and the National Art Award in 1990. That same year, the Royal National Theatre in the UK invited the Contemporary Legend Theater to perform The Kingdom of Desire in Stratford-on-Avon, where Wei was dubbed "the most beautiful Lady Macbeth."

Wei currently teaches at the Taipei National University of the Arts. She is also the leading actress of National Kuo-Kuang Chinese Opera Company, as well as the director of the Wei Hai-min Chinese Opera Foundation.