The Navy League of Canada and the Royal Canadian Navy hosts a conference on maritime security challenges in the Pacific. 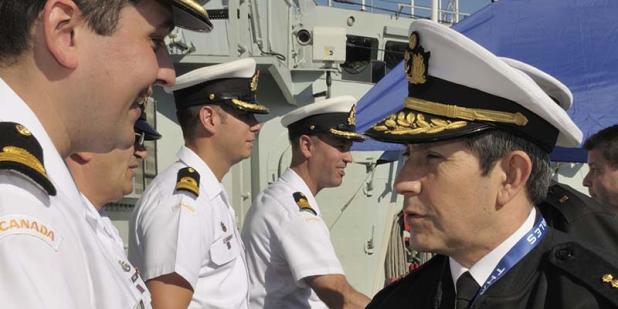 The strategic nexus of the maritime domain is indisputable: 90 percent of the world’s commerce travels by sea; the majority of the world’s population lives within a few hundred kilometres of the oceans and nearly three-quarters of the world is covered in water. The sea has long been the basis of prosperity and security: a stable and secure ocean commons has been the foundation of the significant expansion of trade,  communications, and wealth across the world. With the global shift towards Asia, which is primarily a maritime theatre, the notion of Pacific seapower is increasingly at the heart of discussions amongst lawmakers, naval planners, academics and industry representatives. The challenge is to apply seapower in a manner that protects national interests at sea, promotes greater collective security, stability, and trust, and does so in a manner that is appropriate to the region.

Presentation:
Where the Land Meets the Sea – A Strategic Overview of the Indo-Pacific

The maritime domain is incredibly complex, with interactions and intersections between navies and maritime agencies, shipping companies, non-governmental organizations, individual sailors, and the environment itself. Moreover, the seas are often where geopolitics and Great Power rivalries play out in ways that would be impossible on land, especially in Asia, a quintessentially maritime region.  A complete understanding of maritime issues is thus impossible without knowing how they are influenced by factors on land.  What geopolitical and economic events and trends, then, are critical for maritime practitioners to know as they look out into the wider seascape?

The safety and security of the ocean commons face a diversity of challenges. The growing complexity of the international political, legal, and economic environment has created new and multifaceted sources of friction at sea, as seen in the South China Sea. Meanwhile, changes to the natural environment, like climate change and over fishing, threaten to erode the ways in which the global community depends on the sea and its resources. How are these challenges impacting maritime activities in the Pacific, and how can stakeholders be better positioned to manage and mitigate these emerging and ongoing sources of risk?

Seapower is a national strategic resource that involves more than just the activities of navies and other maritime enforcement agencies. Seapower itself is a measure of a nation’s ability to use and exploit its maritime resources and capabilities, and these efforts should be coordinated at the highest levels through the creation of comprehensive national maritime strategies. A clear articulation of these goals can facilitate discussions on what civil and military platforms and activities can be used to achieve these objectives. How do modern states approach the creation of these strategies? Does the globalized economy change the way states exercise their seapower? How do states put their maritime strategies into practice?

The dynamism of today’s world presents governments and navies with a myriad of challenges in their efforts to build and renew national maritime capabilities. It has been argued that shipbuilding – only one component of renewing a national maritime capability – represents the nexus of ambition between strategic goals and fiscal and technical realities. However, it is critical to ensure that people and hardware are viewed holistically when it comes to renewing a maritime capability rather than as separate components to be integrated later. Given the complicated balance between a nation’s security objectives and available resources, what strategies are being pursued to ensure that operational excellence is maintained and that institutions are able to integrate new capabilities and technologies into their future fleets?

No single nation has the capacity to take sole guardianship of the global system. Indeed, given the challenges and complexities that exist, multinational relationships are critical in ensuring prosperity and security at sea. Yet, it is one thing to call for cooperation, and quite another thing to make it happen, especially in the Indo-Pacific region, which is replete with competing interests, histories and goals, and absent a formal regional security framework such as NATO. Is a sense of regional identity crucial to achieving an integrated approach to maritime security in the Pacific? How are partnerships evolving to promote capability and capacity building at sea? Are there mutual challenges that could be jointly met, independent of larger disagreements, in order to build confidence?

Panel 5:
The Game-Changers – Technological advancements in the maritime domain

Technological developments can dramatically alter the way navies and maritime agencies operate. The ceaseless development of aerial, surface and subsurface capabilities has broadened the dimensional reach of maritime forces, while future unmanned and cyber capabilities will undoubtedly present new challenges and opportunities. How are navies positioning themselves to be leaders in innovation, and what are the emerging technologies that could pose the next great revolutions in maritime affairs? What future is there for cyber operations in the naval realm?

Special Presentation: Be it resolved that the Arctic will become of greater importance compared to conventional seas/routes.

Special Forum on the Future of Pacific Seapower

States throughout Asia are increasingly dependent on maritime resources and trade for their prosperity. Much of the world economy depends on the safe transit of commercial vessels through Asian waters, though significant portions of these seas are the subject of intractable territorial disputes. Competition for resources is increasing, while states have devoted larger portions of their budgets to building and sustaining ever more sophisticated naval forces. Conflict is far from certain, though these competing trends suggest that regional tensions are likely to increase if cooperative solutions continue to remain elusive. What does this increase in economic activity and technological sophistication mean for the future of maritime operations in the region, and what might be the result of a failure to find cooperative political solutions to the region’s most pressing security issues? What role might non-regional states play in helping to stabilize this globally critical region?

Maritime Security Challenges 2016 full conference registration fees include access to all sessions, two continental breakfasts, two conference lunches, the welcome reception (3 October) and the conference banquet (4 October). Registration also includes daily coffee breaks. Delegates who are travelling with guests will have the option to purchase tickets for the reception, lunches and banquet for their guest if desired.