The Weatherhead East Asian Institute and the Center for Korean Research invite you to a special roundtable discussion, featuring four Korea specialists' views on recent developments in North Korea. 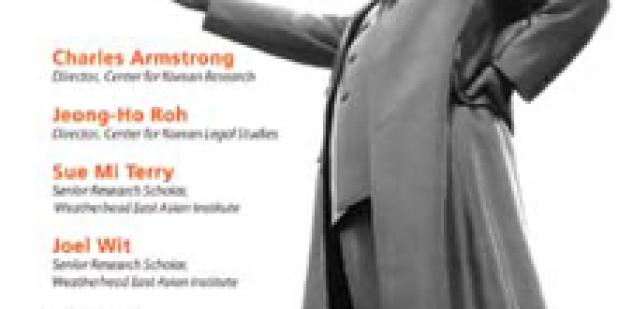 Charles Armstrong is a specialist in the modern history of Korea and East Asia. He has written or edited numerous books on modern and contemporary Korea, including The Koreas; The North Korean Revolution, 1945-1950; Korea at the Center: Dynamics of Regionalism in Northeast Asia; Korean Society: Civil Society, Democracy, and the State; and Tyranny of the Weak: North Korea and the World, 1950-1990 (forthcoming 2012). Armstrong teaches courses on Korean history, U.S.-East Asian relations, the Vietnam War, and approaches to international and global history. He is a frequent commentator in the U.S. and international media on Korean, East Asian, and Asian-American affairs. He received his BA from Yale, his MA from the London School of Economics, and his PhD from the University of Chicago.

Curtis J. Milhaupt is the Parker Professor of Comparative Corporate Law and Fuyo Professor of Japanese Law at Columbia Law School. He is also a member of Columbia University's Weatherhead East Asian Institute. Milhaupt's research and teaching interests include the legal systems of East Asia (particularly Japan), comparative corporate governance, and law and economic development. His research has been profiled frequently in The Economist and The Financial Times and has been widely translated. Milhaupt has been a member of several international project teams focused on major policy issues in Asia, including one charged with designing an "institutional blueprint" for a unified Korean peninsula. He holds a BA from the University of Notre Dame and a JD from Columbia Law School.

Jeong-Ho Roh is a recognized expert on North and South Korean legal relations. Specializing in the development of constitutionalism and democracy in both the South and North Korean legal systems, as well as U.S. and East Asian international transactions, Roh served as Legal Advisor to the Korean Ministry of National Unification on the KEDO North Korean Light Water Reactor Project and is a member of the Korean Ministry of Justice's New Round Legal Assistance Council. As Lecturer-in-Law at Columbia Law School, he teaches "Geopolitics of Law and Conflict on the Korean Peninsula" and "Korean Legal System in the Global Economy." He holds a BA from Seoul National University and a JD from Columbia, where he was Financial Editor for the Columbia Journal of Transnational Law.

Joel Wit was a key participant in the establishment of the Korean Peninsula Energy Development Organization (KEDO). Previously, Wit served as Senior Advisor to Ambassador Robert L. Galluci from 1993 to 1995, where he developed strategies to help resolve the crisis over North Korea's weapons program, and as Coordinator for the U.S.-North Korea Agreed Framework from 1995 to 1999, where he was the official in charge of implementation. Prior to his efforts on the Agreed Framework, Wit was assigned to the State Department's Office of Strategic Nuclear Policy, where he was responsible for U.S. policy on a range of issues related to nuclear arms control and weapons proliferation. Wit was a Guest Scholar at the Brookings Institute from 1999 to 2001, and is currently a Senior Fellow of the International Security Program, Center for Strategic and International Studies. He has published numerous articles on Northeast Asian security issues and is coauthor of Going Critical: The First North Korean Nuclear Crisis (Brookings Institution Press, 2004). Wit received his BA from Bucknell University and his MIA from Columbia University.

The discussion will be moderated by Curtis Milhaupt, Director of the Center for Japanese Legal Studies.

Registration is required and available here.