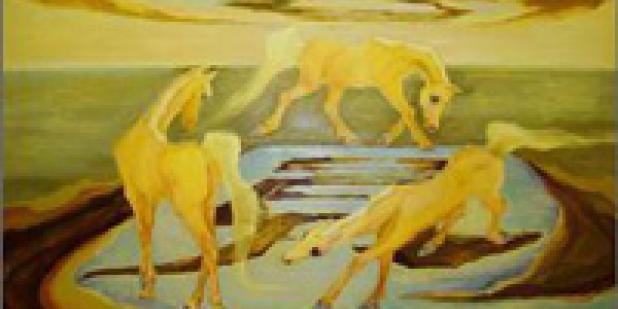 Horse Expression: Nature vs. Culture is a collection of compositions representing the metaphysical meeting ground of nature and culture, using the horse and Chinese calligraphy as staged drama for artistic expression.

In contrast with classic Chinese paintings, in which man and his actions are rendered small and insignificant while nature omnipotent and magnificent, Lin’s images transport us to an entirely different reality. There, the negotiation between intertwined physical forms beckons reflection on coexistence and dominance, on a nature to be cultured, a culture to be consecrated, the challenge for one to live within and alongside the other and the threat of mutual devaluation or diminishment.

Lin's art focuses on the viewpoint of the animal, rather than that of the human. Throughout history, the horse carries connotations of harnessed labor, militarism and entertainment, namely as subjugated under man. To depict the horse in said context is to tell the story not of the animal, but of the human experience; this perspective is consequently not of interest to Lin. Rather, she endows her animal with interior life and soul, capturing the essence of the animal existence, untainted.

Born in Sichuan, China, Lin Qian (林倩) first trained as an aerospace engineer, graduating with a B.S. from Beijing University of Aeronautics and Astronautics and a M.S. from the University of Michigan. While working towards a Ph.D degree at Carnegie Mellon University, Lin ventured into an Introduction to Art History course and was completely mesmerized. This, her first exposure to the world of western art, eventually led to her decision to switch career and become an artist. Lin received formal studio art education and training at the University of Pittsburgh (1995) and at Brandeis University (1996-1998). Since then she lived and worked in Boston, Massachusetts before moving to New Haven, Connecticut in the fall of 2006.