History and China’s Foreign Relations: The Achievements and Contradictions of American Scholarship

This USCI symposium brings together historians, political scientists, and policy analysts to discuss whether or not studies of the past help to illuminate the China's foreign affairs in the present. 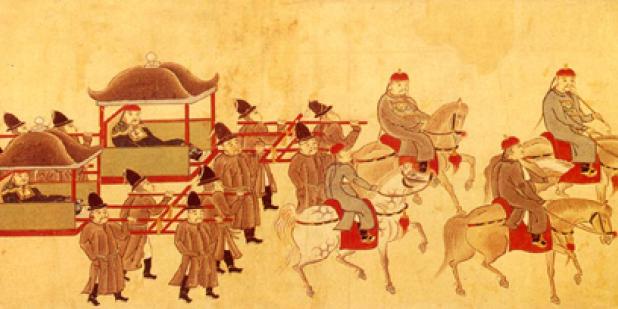 use in understanding the enormous changes taking place in China and in US-China relations. Interchange among historians, political scientists, journalists, and policy analysts in and out of government has been intense and remains so. Is China's approach to the world today shaped in any way by its long history as a very large single state, an "empire without neighbors"? John King Fairbank of Harvard was a central figure in getting these conversations started around 1950. He devoted a great deal of time to talking to people in Washington and writing for the general public, and pursued in his own scholarship and in interaction with others the problem of the legacy of China's "tribute system" of foreign relations.

The time is ripe for reflection on interactions among all these kinds of scholarship in the world of 2008, vastly more complicated but not necessarily more successful than in Fairbank’s day, and on the big issues of how understanding of the past may help to illuminate a very complex present. Participants in this seminar, all of global distinction and visibility, include three representatives of the world of policy analysis, one academic political scientist, and three historians.

[The conference papers were originally shared here, but are now available in a special double issue of The Journal of American-East Asian Relations (v.16, n. 1/2 2009) and in a book Past and Present in China's Foreign Policy (2011).]

Presenters:
"The Policy Analyst and Historical Perspectives: Notes of a Practitioner"

"Some Things We Used to Know about China’s Past and Present (But, Now, Not So Much)"
Alice Lyman Miller is a research fellow at the Hoover Institution at Stanford University and general editor of and contributing author to Hoover's China Leadership Monitor. She also teaches as visiting associate professor in the Departments of History and Political Science at Stanford. She is the author of Science and Dissent in Post-Mao China: The Politics of Knowledge (Washington, 1996).

"How Many Asymmetries? Continuities, Transformations, and Puzzles in the Study of Chinese Foreign Relations"
John Wills, Jr. is professor of history emeritus at USC. He is the conference organizer and continues to work on China's foreign and trade relations. He is the author of Pepper.Guns, and Parleys: The Dutch East India Company and China, 1662-1681 (Harvard, 1974), Embassies and Illusions: Dutch and Portuguese Envoys to K'ang-hsi, 1666-1687 (Harvard, 1984), and Mountain of Fame: Portraits in Chinese History (Princeton University Press, 1994; paperback 1996). He co-edited From Ming to Ch'ing: Conquest, Region, and Continuity in Seventeenth-Century China (Yale, 1979; paperback, 1981).

"Tribute, Asymmetry and Imperial Formations: Rethinking relations of power in East Asia"
James Hevia is a professor of history at the University of Chicago. His research has focused on empire and imperialism in eastern and central Asia. Primarily dealing with the British empire in India and Southeast Asia and the Qing empire in China, the specific concerns have been with the causes and justifications for conflict; how empire in Asia became normalized within Europe through markets, exhibitions and various forms of public media; and how the events of the nineteenth century are remembered in contemporary China. Current research centers on how European empires in Asia developed and became dependent upon the production of useful knowledge about populations and geography to maintain themselves.

"Asymmetry and Colonialism: What's the Difference? Reflections on Imperial China"
Peter C. Perdue is a professor of History at Yale University. He has a Ph.D. (1981) from Harvard University in the field of History and East Asian Languages. He is the author of Exhausting the Earth: State and Peasant in Hunan 1500-1850 A.D.(Council on East Asian Studies, Harvard University, 1987) and China Marches West: The Qing Conquest of Central Eurasia (Harvard University Press, 2005). He has also written on grain markets in China, agricultural development, and environmental history.

"Recognition, Deference, and Respect:  Generalizing the Lessons of an Asymmetric Asian Order"
Brantly Womack is a professor of Political Science at the University of Virginia. He is the author of China and Vietnam: The Politics of Asymmetry (Cambridge, 2006) and Foundations of Mao Zedong's Political Thought, 1917-1935 (1982) and co-author of Politics in China (1986). He has edited and translated three additional books.

How the Past Shapes the Present: Five Ways in Which History Affects China's Contemporary Foreign Relations
Harry Harding is University Professor of International Affairs at George Washington University. From 2005 to 2007, he served the Eurasia Group as Director of Research and Analysis, a political risk advisory and consulting firm headquartered in New York.  A specialist on Asian affairs with a particular interest in China, he is the author of A Fragile Relationship: The United States and China Since 1972 (Brookings Institution Press, 1992), China and Northeast Asia: The Political Dimension (University Press, 1988), China's Second Revolution: Reform After Mao (Brookings Institution Press, 1987), and Organizing China: The Problem of Bureaucracy, 1949-1976 (Stanford University Press, 1981). He has published articles in a wide range of scholarly and policy journals, and serves on the editorial boards of the China Quarterly and the Journal of Democracy.

The symposium is free and open to the public. A reception will follow the symposium. RSVPs are appreciated, but not required. Call 213-821-4382 or write to uschina@usc.edu.

Parking on the USC campus is $8. Please enter campus through Gate 3 on Figueroa St. and 35th St. and purchase parking for Parking Structure X. Click here to download a campus map.

Note: Images: Chinese envoy during the Qing dynasty to the Ryukyu Islands. Qing-era painting entitled "thousand countries tribute," Chinese Foreign Minister Yang Jiechi and U.S. Secretary of State Condoleezza Rice meet at the APEC Summit in Australia in 2007. The thumbnail of the Chinese boy was adapted from a photo by Kristen Placek.