In the Heat of the Sun 阳光灿烂的日子

The UCLA International Institute presents the film, "In the Heat of the Sun," as part of their 2014 China Onscreen Biennial: Let the Movies Fly. 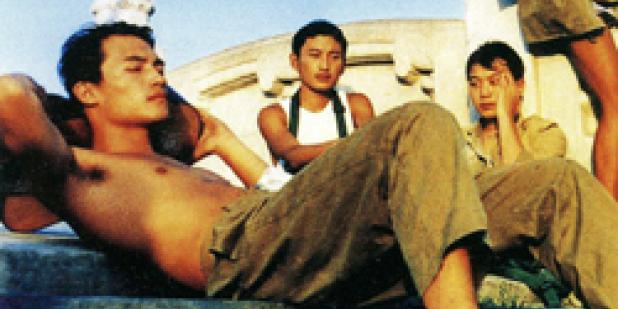 Already internationally recognized for his performances in Hibiscus Town (1984) and Red Sorghum (1987), Jiang Wen made his impressive directorial debut with this adaptation of the 1991 novel Wild Beast by controversial “hooligan” author Wang Shuo. Despite its literary source, Jiang has described In the Heat of the Sun's coming-of-age tale, set in the closing years of the Cultural Revolution, as semi-autobiographical. Told entirely via flashback and narrated from the vantage of adulthood by the central character, Ma Xiaojun, it radiates a warm, if cheeky, nostalgia that distinguishes it from more revolutionary or harrowing filmic depictions of the era.

Left behind in Beijing when his parents are ordered to the countryside for revolutionary work, the precocious Xiaojun falls in with a band of equally unsupervised, ne’er do well friends who experience the capital, seemingly emptied of adults, as a vast playground for youthful hijinks. For his part, Xiaojun uses his fascination and facility with locks for a curious hobby: He breaks into people’s homes, not to steal, but for the voyeuristic thrill. In one particular apartment, he becomes transfixed by an enigmatic photo of a woman whom he soon arranges to meet by “chance.” Older, wiser and wilder, she quickly falls in with Xiaojun’s gang, inspiring ever more posturing and jealous acting out.

Jiang allows darker currents to creep in at the edges (one gang fight starts out like Westside Story and ends in a violent, sharp critique of political fascism) and devilishly complicates this adolescent idyll when Xiaojun, as narrator, admits to having an unreliable memory. Speaking from the distance of years, he says, “Change has wiped away my memories.” – Paul Malcolm

Jiang Wen graduated from the leading acting school in China, the Central Academy of Drama, in 1984. Leading roles in a series of landmark films by Fifth Generation directors, including Zhang Yimou’s Red Sorghum (1987) and Tian Zhuangzhuang’s Li Lianying: The Imperial Eunuch (1991), quickly established Jiang as one of the biggest stars in China. He made his debut as a writer-director in 1994 with In the Heat of the Sun, and his follow-up film Devils on the Doorstep (2000) won the Grand Jury Prize at Cannes. His newest film as writer-director Gone with the Bullets (2014) is scheduled for release in China later this year.