The Global China Center hosts a talk with Mike Chinoy, a non-resident Senior Fellow at the U.S.-China Institute, to look at Hong Kong in global perspectives. 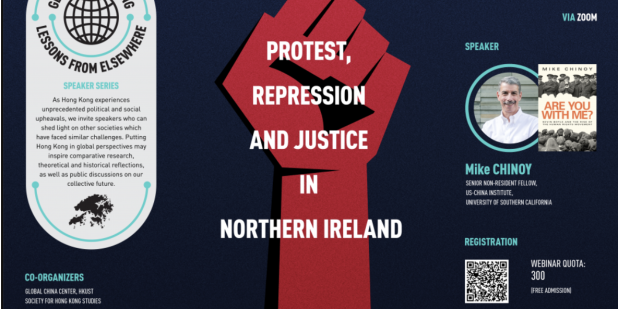 Mike Chinoy is a Non-Resident Senior Fellow at the U.S.-China Institute at the University of Southern California. Previously, he was a Senior Fellow at the Los Angeles-based Pacific Council on International Policy, focusing on security issues in North Korea, China, and Northeast Asia.

He has reported on the most important events in Asia since the mid-1970s, including the death of Mao Zedong, the rise of China, the Hong Kong handover, the Soviet and US wars in Afghanistan, the Southeast Asian tsunami, elections and political crises in Taiwan, and developments in North Korea, which he has visited 17 times.

Mr. Chinoy has received numerous awards for his journalism, including the Emmy, Peabody, and Dupont awards.

He is the author of four books: China Live: People Power and the Television Revolution, Meltdown: The Inside Story of the North Korean Nuclear Crisis, The Last POW, and Are You With Me? Kevin Boyle and the Rise of the Human Rights Movement.

He is a frequent commentator and analyst on Asian affairs, appearing on CNN, BBC, PBS, Australian ABC, and other broadcast outlets. His articles have been published in the Washington Post, Los Angeles Times, Yale Global Online, the Irish Times, the South China Morning Post and elsewhere.

He holds a BA from Yale University and an MS from Columbia University. He is based in Hong Kong

About the "Global Hong Kong: Lessons from Elsewhere" Speaker Series
As Hong Kong experiences unprecedented political and social upheavals, we invite speakers who can shed light on other societies that have faced similar challenges. Putting Hong Kong in global perspectives may inspire comparative research, theoretical and historical reflections, as well as public discussions on our collective future.