Zhang Yang's commentary on the value of community and human connectivity in modern China. 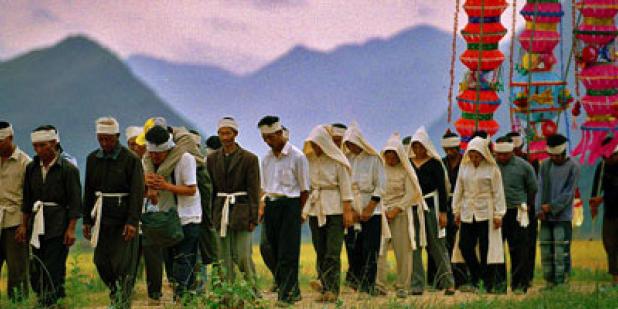 Synopsis
In this soulful and humane comedy, Zhao, a middle-aged construction worker, struggles to fulfill a dying co-worker's last wish to be buried in China's Three Gorges region. Setting out with his colleague's body in tow, Zhao travels hundreds of miles across extraordinary countryside, encountering a number of colorful adventures and characters - and even discovering love in some unlikely quarters. Director Zhang Yang's humorous and moving tale of friendship offers a powerful, and sometimes slapstick, commentary on the value of community and human connectivity in modern China.

Zhang Yang was born in Beijing, China in 1967. In 1992, he graduated from the Central Theatre Academy. He then directed a theatrical production of Kiss of the Spider Woman and went on to direct over twenty underground music videos. His first feature film, Spicy Love Soup, swept the domestic Chinese awards and his second feature, Shower, won the FIPRESCI prize at the Toronto International Film Festival. Getting Home is his fifth feature film