The Emperor's Private Paradise: Treasures from the Forbidden City

Never before seen by the public, the contents of an Emperor's private retreat deep within the Forbidden City will be revealed for the first time at the Peabody Essex Museum in Salem, MA. 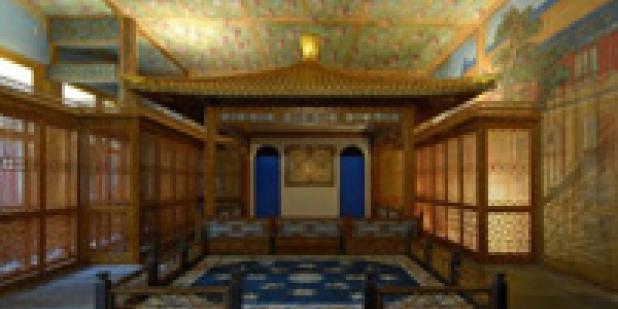 Never before seen by the public, the contents of an Emperor’s private retreat deep within the Forbidden City will be revealed for the first time at the Peabody Essex Museum.

An 18th-century compound in a hidden quadrant of the immense imperial complex, the Qianlong Garden (also known as the Tranquility and Longevity Palace Garden), is part of a decade-long, multimillion-dollar conservation initiative undertaken by the World Monuments Fund in partnership with the Palace Museum, Beijing.

Ninety objects of ceremony and leisure — murals, paintings, wall coverings, furniture, architectural elements, jades and cloisonné — unveil the private realm of the Qianlong Emperor (r.1736-1796), one of history’s most influential figures. In his time, he was among the richest, most powerful men in the world. A connoisseur, scholar and devout Buddhist, he created a luxurious garden compound to serve throughout his retirement as a secluded place of contemplation, repose and entertainment.

Organized by PEM in partnership with the Palace Museum, Beijing, and in cooperation with World Monuments Fund. The exhibition travels to The Metropolitan Museum of Art, New York, and the Milwaukee Art Museum. The exhibition and national tour are made possible in part by generous support from the Mandarin Oriental Hotel Group and American Express. A major grant has been provided by the E. Rhodes and Leona B. Carpenter Foundation, and additional support has been provided by the National Endowment for the Arts, ECHO (Education through Cultural and Historical Organizations) and the East India Marine Associates of the Peabody Essex Museum.