Echoes of the Past: The Buddhist Cave Temples of Xiangtangshan

Smithsonian Institute presents an exhibition in which majestic sixth-century Chinese Buddhist sculpture is combined with 3D imaging technology in this exploration of one of the most important groups of Buddhist devotional sites in early medieval China. 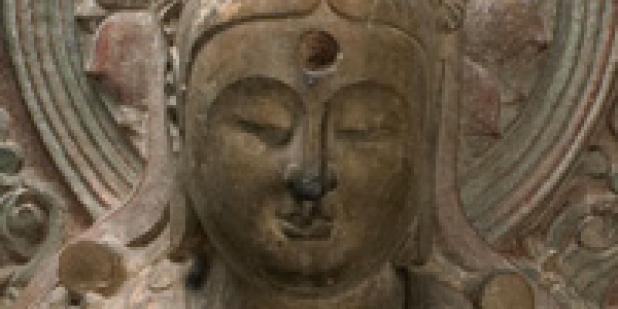 Majestic sixth-century Chinese Buddhist sculpture is combined with 3D imaging technology in this exploration of one of the most important groups of Buddhist devotional sites in early medieval China. Carved into the mountains of northern China, the Buddhist cave temples of Xiangtangshan  were the crowning cultural achievement of the sixth-century Northern Qi dynasty (550-77 CE). Once home to a magnificent array of sculptures—monumental Buddhas, divine attendant figures, and crouching monsters framed by floral motifs—the limestone caves were severely damaged in the first half of the twentieth century, when their contents were chiseled away and offered for sale on the international art market.

Because of the extensive damage to Xiangtangshan, it has been all but impossible to appreciate the caves' original appearance or to understand the rich and complex artistic and religious achievement they once represented. In recent years, however, research and new technologies have made it possible to digitally envision some of the caves as they appeared before their tragic despoliation. In Echoes of the Past, ancient sculptural masterpieces will be united with a set of innovative digital components, including a video installation that offers an immersive, kinetic re-creation of one of the largest stone temples. Touch screens and research kiosks will offer more detailed information about the site and the themes explored in the exhibition.

Echoes of the Past: The Buddhist Cave Temples of Xiangtangshan is organized by the Smart Museum of Art, University of Chicago and the Arthur M. Sackler Gallery, Smithsonian Institution.

Major funding is provided by the National Endowment for the Humanities, the Leon Levy Foundation, the Smart Family Foundation, and the E. Rhodes and Leona B. Carpenter Foundation. The catalogue was made possible by Fred Eychaner and Tommy Yang Guo, with additional support from Furthermore: a program of the J. M. Kaplan Fund.

Additional support for the Smart Museum of Art presentation is generously provided by the National Endowment for the Arts, the University of Chicago Womens Board, and Helen Zell.

Additional support for the Arthur M. Sackler Gallery presentation is provided by the Cotsen Foundation for Academic Research.