Fabien Fryns Fine Art, Los Angeles, is pleased to announce Lu Xinjian's first solo exhibition in the US from June 25 through August 27, 2011. 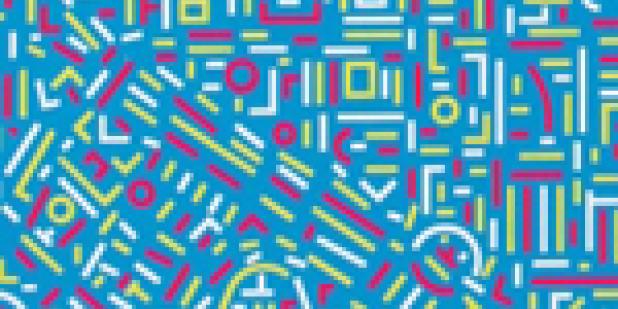 In Lu’s obsessively meticulous paintings of aerial views of cities on Google Earth, including San Diego, Los Angeles, Palm Springs, Napa Valley and Monterey, among other places in California, Lu reconfigures architecture, landscape, human activities and infrastructure to short yet exclamatory lines, circles and squares, that are woven into continuous and colossal networks. The lively colors that are applied to these motifs generate explosive rhythms and energy against the monochromic background. City DNA San Diego, 2011, employs the color of aqua blue as the metaphorical background to reflect beaches and the surfing culture that San Diego is famous for. The vivid colors of white, yellow and fuchsia of the motifs are derived from the colors on the flag of San Diego. Circles and curvy lines symbolize nature; straight lines and squares imply man-made structures.

Lu eliminates the painting elements of perspective, light and depth; relies on color, lines and composition to fulfill his painterly vision and his interpretation of urban planning in the context of globalization and homogenization. The technique of masking adds precision to his artistic vocabulary. Lu’s abstract approach to topography decodes the places that we are familiar with. The recognizable landmarks of our environment are reduced and transformed into geometry. Only upon closer scrutiny, the viewer can discover each city’s characteristics through colors and the arrangement of the lines and shapes.

Such a reconfiguration of data can trace its history back to as early as cubism, futurism and Mondrian’s neoplasticism in the early 20th century. These movements were marked by the artists’ attempt to translate their experience of flying above an open space where the perspective was constantly shifting under the pilot’s eyes in dynamic and synthetic visual terms. Similar to the invention of aircraft, Google Earth enables Lu to survey our landscapes from a whole new perspective: optically and philosophically. For Lu, his painting is not only a device to articulate the fascinating observation from the height of a satellite on Google Earth, but also an instrument to illustrate how human societies impact the earth. Each city is devoid of its uniqueness in the web of uniformed lines and motifs, which are the metaphor for the generic blueprints of modern urban development and regulation: the DNA of cities. Lu creates his own visual language to tell the tale of a changing ecosystem. Through the process of decoding and recoding, the dividing lines between public and private, urban and rural, nature and human intervention are diminished. Each picture forms a reformatted landscape through the lens of ecology and technology.

Lu Xinjian was born in Jiangsu Province in1977. He graduated from Nanjing Arts Institute, then studied at Design Academy Eindhoven, the Netherlands. He earned his MFA from Frank Mohr Institute in the Netherlands in 2006. Lu now lives and works in Shanghai. His work has been exhibited in Asia and Europe. His exhibition at Fabien Fryns Fine Art will be his debut in North America.

Lu Xinjian’s paintings from his new series of City DNA III will be on view from June 25 through August 27. A vernissage will be held on Saturday, June 25, from 3 to 6 p.m. Catalogue is available.