University of California at Irvine presents a Chinese Kun opera, The Peony Pavilion. 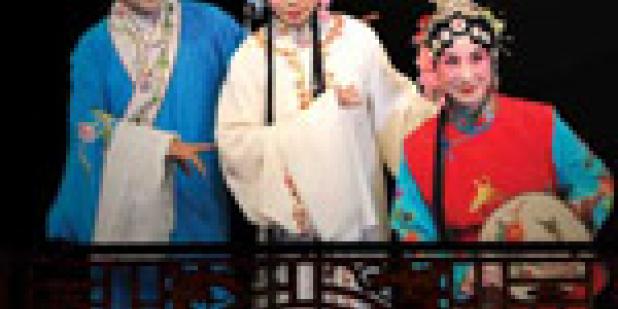 About THE PEONY PAVILION :

Written by Tang Xianzu (1550-1616), one of the most celebrated playwrights in Chinese history, The Peony Pavilion (1598) is a kunqu play about love.  With 55 scenes, the author takes his readers through the journey of life and death, dream and reality, Confucianism and Daoism, and even to the underworld, all for the quest of love.  Du Liniang, a sixteen-year-old maiden, falls in love with the handsome scholar Liu Mengmei in her dream in the garden, by the Peony Pavilion.  Unable to find her love again in the real world, she gradually withers away.  Before her death, she paints a portrait of herself, as a testimony of her youth, beauty, and love.  Three years later, Liu Mengmei discovers the portrait and falls in love with the woman in the portrait.  Moved by her uncompromising passion, the Judge of the Hades grants her permission to travel to the real world so she can consummate her love with Liu.  Eventually Liu realizes the woman he sees every night is actually a ghost in the human form.  With extreme courage and with his faith of love, Liu asks for help from Sister Stone, a Daoist nun to revive Du Liniang.  Finally the body and spirit of Du reunite and the couple celebrates their nuptial bliss.

This play is often compared with Shakespeare’s famous love story Romeo and Juliet.  As a matter of fact, these two love stories were written in the same year, 1598.  Going beyond Shakespeare’s tragedy, the Chinese classic does not end with the lovers’ death as the testimony for love.  The Chinese lovers have tremendous faith of love and courage to defy the traditional Confucius values and to transcend the boundaries of life and death.  “Love is not love at its fullest if one who lives is unwilling to die for it, or if it cannot restore to life one who has so died,” claims Tang Xianzu.

The collaboration between Jade Bell Performing Arts Association and UCIrvine Drama students is a historic event.  Since most American theatre education focuses on Euro-American theatre history and methods of acting, Chinese opera is rarely taught and rarely produced.  With the enthusiasm of Tess Wu, the leader of the Jade Bell Performing Arts Association, and the wholehearted support of the Department of Drama, UCIrvine Drama students have a wonderful opportunity to train in Chinese opera movement, singing, and speaking, learn about traditional make-up and costuming, and perform with first-rate Chinese opera artists.

Your generosity will help us build a twenty-first century educational institute for performing arts with a true world vision.  It is our greatest hope that we can raise sufficient funding to support a meaningful learning environment for theatrical endeavors of the highest order and multicultural education within the UCIrvine Drama Department. Can we count on you?

Everyone — cast members, musicians, production staff, UCI professors, and students —volunteer for this singular event:  Our ultimate dream is to promote Chinese performing arts and multicultural education in Southern California.

Your donation will support:

* Multicultural theatre education with world vision
* Lectures and master classes by Chinese opera scholars and artists
* Scholarships for graduate and undergraduate students
* Production costs for the UCIrvine Drama Season
* And finally, it will help our dream come true!

Your donation is tax deductible.

Performance will be in Chinese with English and Chinese subtitles

Cost:
$35 & $25 for general public, $15 for UCI students, VIP: donations of $100 or more will enjoy premiere seating and invitations to our post-performance party
Event Website URL:
http://drama.arts.uci.edu/chineseopera.html