The USC U.S.-China Institute presents a book talk with editors Angilee Shah and Jeffrey Wasserstrom and contributor James Carter. Followed by a reception. 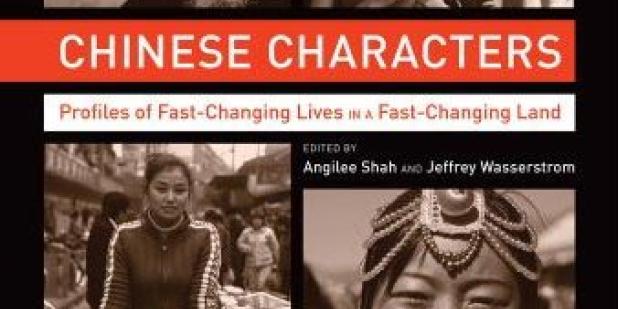 Click here to watch a video of the panel discussion.

An artist paints landscapes of faraway places that she cannot identify in order to find her place in the global economy. A migrant worker sorts recyclables and thinks deeply about the soul of his country, while a Taoist mystic struggles to keep his traditions alive. An entrepreneur capitalizes on a growing car culture by trying to convince people not to buy cars. And a 90-year-old woman remembers how the oldest neighborhoods of her city used to be. These are the exciting and saddening, humorous and confusing stories of utterly ordinary people who are living through China's extraordinary transformations. The immense variety in the lives of these Chinese characters hints at China’s great diversity.

Chinese Characters is a collection of portraits by some of the top people working on China today. Contributors include a Pulitzer Prize winning journalist, a Macarthur Fellow, the China correspondent for a major Indian newspaper, and scholars. Their depth of understanding is matched only by the humanity with which they treat their subjects. Their stories together create a multi-faceted portrait of a country in motion. This volume contains some of the best writing on China today.

Angilee Shah is a freelance journalist and editor in Los Angeles. She has reported from across Asia, including China, Thailand, Indonesia, and Sri Lanka, and was a South Asian Journalists Association Reporting Fellow in 2007-8. She is a former editor of the online magazine AsiaMedia and a consulting editor to the Journal of Asian Studies. Her writing has appeared in the Far Eastern Economic Review, Mother Jones Online, Pacific Standard, the LA Weekly, TimeOut Singapore, and Global Voices. She is the co-editor of Chinese Characters: Profiles of Fast-Changing Lives in a Fast-Changing Land (UC Press, 2012).

Jeffrey Wasserstrom is the author of four books on China and the editor or co-editor of several more, including most recently Chinese Characters: Profiles of Fast-Changing Lives in a Fast-Changing Land, which contains chapters by both fellow academics and such acclaimed journalists as Peter Hessler, Leslie T. Chang, Evan Osnos, and Ian Johnson. Wasserstrom is a Professor of History at the University of California, Irvine and the Editor of the Journal of Asian Studies. He is also the Asia editor of the Los Angeles Review of Books, an Associate Fellow of the Asia Society, and a co-founder of the "China Beat" blog.

James Carter is Professor of History at Saint Joseph's University. He has lived and traveled widely in China, is the author of a history of Harbin and of Heart of China, Heart of Buddha: The Life of Tanxu, a Twentieth Century Monk (Oxford 2010), and is the editor of the journal Twentieth-Century China. He is a past president of the Historical Society for 20th-Century China and a Public Intellectuals Program fellow of the National Committee on United States-China Relations.

The mission of the Office of Religious Life is to foster a vibrant university community that encourages the pursuit of meaning through spiritual reflection and free inquiry, provide fair opportunities to participate in religious life, advance mutual understanding and respect among different traditions -- and in all these ways, strengthen us to actively engage in building a just and peaceful world.