Bowers Museum is proud to present the latest in its series of exhibits highlighting important treasures from around the world. China's Lost Civilization: The Mystery of Sanxingdui will include objects from the discovery termed "the ninth wonder of the world" and acknowledged by many scholars as one of the greatest archaeological finds ever to be unearthed. 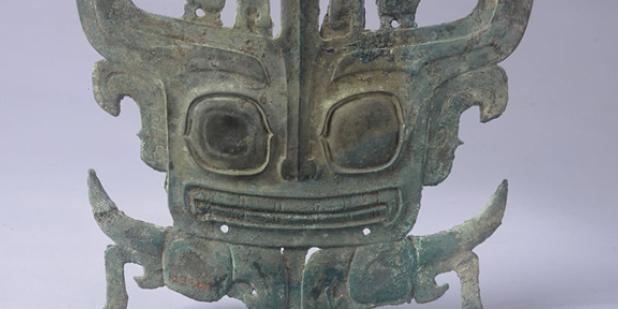 During the summer of 1986, construction workers accidentally uncovered an astounding cache of more than 200 ancient jades, weapons, burned animal bones, over 60 elephant tusks, monumental bronzes, and a life-sized statue of a nobleman at Sanxingdui, about 24 miles outside of the Sichuan Province capitol of Chengdu. Most of the contents had been intentionally destroyed and deposited in two large pits. This chance discovery has become one of the most important archaeological finds of the 20th century and has forced scholars to rewrite early Chinese history. The objects date to about 1200 BC, a time when it was thought that the cradle of Chinese civilization existed 745 miles to the northeast on the Yellow River in China’s Central Plain region.
Excavations at Sanxingdui reveal the remains of a sophisticated culture who excelled in their bronze making abilities. These cast bronzes were far larger and much stranger in appearance than anything seen in the ancient world before. The three largest masks are in the form of human heads with supernatural features including large wing-like ears, monstrously protruding eyes or ornate appendages. Other bronzes reveal traces of paint or are covered with gold. The Sanxingdui culture left no written record or human remains and appears to have existed for only about 350 years before it vanished.
In 2001, another archaeological discovery, this time in the city of Chengdu at a site named Jinsha, revealed possible clues to the mystery of where the Sanxingdui culture may have gone. China’s Lost Civilization will present over 120 of the most important discoveries from both Sanxingdui and Jinsha and examine the great mystery of who this 3200 year old culture was. The exhibition will be on view at the Bowers Museum through March 15, 2015 before traveling to the Houston Museum of Natural Science.
China's Lost Civilization: The Mystery of Sanxingdui has been organized by the Bowers Museum and the Cultural Relics Bureau of Sichuan Province, China. Suzanne E. Cahill, Ph.D. is Guest Curator for China's Lost Civilization. Major funding has been provided by John and Mary Tu, Jim and Angela Hsu, China Southern Airlines, Van Cleef & Arpels, the James Irvine Foundation and East West Bank. Additional support has been provided by the Bowers Chinese Cultural Arts Council, the Medellas, Capital Group and the City of Santa Ana.
Cost:
https://7827.blackbaudhosting.com/7827/page.aspx?pid=196&tab=2&txobjid=d8a69b2e-e071-46d6-815c-7c3a5c3cf6a9
Event Website URL:
http://www.bowers.org/index.php/exhibitions/upcoming-exhibitions/190-china-s-los…