The Forgotten Story is a series of historically-based photographs of the Great Wall of China. It is a collaboration between Jonathan Ball, a California based photographer, and David Spindler, one of the world's foremost experts on Great Wall history. 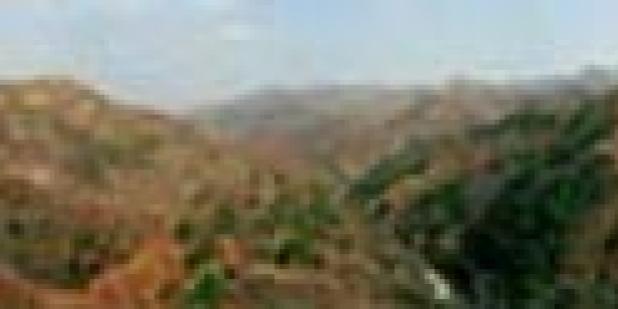 The large scale photographs (9 to 24+ feet in length) depict sites on the Wall where important Mongol and Manchu raids occurred in the 15th, 16th and 17th centuries, and capture the points of view of defenders or raiders. They were taken on the anniversaries of the raids, as close as possible to the time of day when the fighting happened. Ball made the photographs using a panoramic or a 4x5 camera using conventional film, then stitched the images together digitally. Spindler unearthed the vivid and colorful details of long-forgotten battle stories from Ming era (1368-1644) documents scattered throughout libraries in China, Taiwan and Japan.

Jonathan Ball (born 1972) was first exposed to photography when he was a small child, as he watched his father at work in the darkroom he built in the basement of the family's house. By the time he was eleven, he was making and developing his own photographs. Over the years, his work has ranged from photojournalism to architectural photography to independent projects. The independent projects include a study of mobile dwellings (photographing factories where mobile homes, RV's and sailing yachts are made), a series of portraits and interviews of foreigners living in Prague in 1994 (all made in the subject's home or workplace), photographs made with "cubist" pinhole cameras that he makes (these cameras photograph a subject from many points of view simultaneously), and an ongoing series of images of things and people he sees and experiences in his daily life. Born and raised in suburban Maryland and educated at Stanford, Ball lives and works in Oakland, California.

David Spindler (born 1967) is one of the world's leading historians of the Great Wall. In 15 years of research, he has done extensive fieldwork in the Greater Beijing area, while comprehensively researching existing Ming-era texts on the entire Great Wall at Chinese-language library collections worldwide. In addition to a J.D. from Harvard Law School, Spindler holds an A.B. in Asian Studies from Dartmouth and an M.A. in history from Peking University. His article on the "Raid of the Scorned Mongol Woman" will be published this fall in Ming Studies, a scholarly journal. He has been profiled by Peter Hessler in The New Yorker, has appeared on the Today Show, and has been featured in two Discovery Channel documentaries. Spindler grew up in a suburb of Boston and now lives in Beijing.