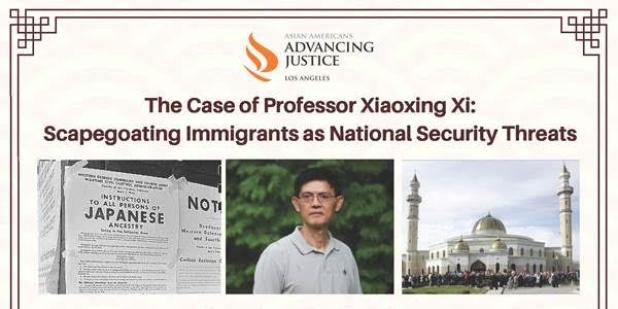 Join Professor Xiaoxing Xi, a Chinese American scientist falsely accused of espionage, and other community leaders as they examine how Chiense American scientists are being racially profield and scapegoated much as Japanese Americans were during World War II or Muslim Americans have been since September 11, 2001. Other speakers include: Brian Sun, partner at Jones Day who has represented a number of Chinese Americans wrongly prosecuted (LA only) and Ameena Qazi, executive director of National Lawyers Guild.

In May 2015, Professor Xiaoxing Xi of Temple University in Philadelphia was arrested and charged by the U.S. government for passing sensitive technology secrets to China. His home was raided by the FBI and he was widely labeled a spy, but months later all charges against him were dropped without explanation. His case is the latest in a recent spate of wrongful prosecutions of Chinese American scientists for economic espionage, and now Professor Xi and others wrongly accused are seeking justice.

On August 10 and 11, Professor Xi will visit Southern California to share his story as part of the“Scientists, Not Spies” campaign, which seeks an apology as well as an investigation of the U.S. Department of Justice’s prosecutions. The events will also explore a broader history of racial profiling by the U.S. government in the name of national security, ranging from wrongful espionage prosecutions of Chinese American scientists, to the profiling of Arab, Middle Eastern, Muslim, and South Asian communities post-9/11, and the internment of Japanese Americans during WWII.

To learn more about Professor Xi's case and the campaign for justice, visit scientistsnotspies.org. To RSVP, click here. A similar event will be hosted by Asian Americans Advancing Justice-ALC on August 9 in San Francisco.

0.5 hour of MCLE credit (Elimination of Bias) will be provided for this activity in Los Angeles and Orange County. Asian Americans Advancing Justice-LA is a State Bar of California approved MCLE provider.