Can Confucianism Save the World?

Join us for a live program with top experts on why Confucianism has the potential to be a beneficial force in the world. 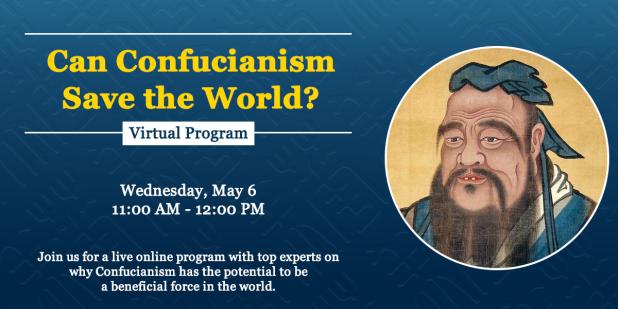 Confucianism has made a comeback in China, and, according to Daniel Bell, it has the potential to be a beneficial force in the rest of the world. Bell’s writing on what he describes as China’s meritocracy has stirred heated debate among academic circles. Drawing on a new book Just Hierarchy: Why Social Hierarchies Matter in China and the World, Bell and co-author Wang Pei argue that Confucian-inspired hierarchies can help deal with the ongoing health crisis and other modern global challenges.

Daniel A. Bell（贝淡宁）is the Dean of the School of Political Science and Public Administration at Shandong University at Qingdao and a Professor at Tsinghua University in Beijing.  Bell is from Montreal and was educated at McGill University and Oxford University. He was founding director of the Berggruen Institute’s Center for Philosophy and Culture. His books include The China Model, China’s New Confucianism, Beyond Liberal Democracy, East Meets West, The Spirit of Cities (co-authored with Avner de-Shalit) and Just Hierarchy: Why Social Hierarchies Matter in China and the Rest of the World (co-authored with Wang Pei), which was just released in March. He is founding editor of the Princeton-China series. He writes frequently for leading media outlets such as the Financial Times, the Wall Street Journal, and the New York Times, and his works have been translated in 23 languages. He has been interviewed in English, Chinese, and French. In 2018, he was awarded the Huilin Prize and was honored as a “Cultural Leader” by the World Economic Forum.

Wang Pei is an assistant professor at the China Institute at Fudan University in Shanghai.