Burning the Books and Killing the Scholars: Representing the Atrocities of the First Emperor of China 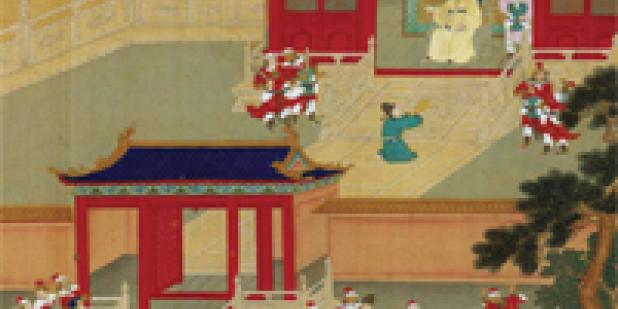 For centuries, the brutal and tyrannical reign of Qin Shihuangdi, First Emperor of China, was summed up by a four-character phrase, fenshu kengru, “He burned the books and buried the Confucian scholars alive.” This refers to two separate, largely unrelated, incidents that the historian Sima Qian tells us took place late in the reign of  the First Emperor. He wove them into the historical narrative as evidence of the emperor’s increasing paranoia and as omens of his imminent loss of Heaven’s favor. In the first incident, the First Emperor decreed that private copies of the Book of Documents, Book of Songs, and the histories of the defeated rival states be banned and turned over to the authorities for destruction. This literary inquisition resulted in an enormous loss of historical knowledge and cultural heritage and earned the First Emperor the enmity of book-revering Confucian scholars for two millennia.

While there is abundant historical proof for the so-called “burning of the books,” the second atrocity, the alleged killing of 460 Confucian scholars, by burying them alive in a pit, has been greatly misinterpreted, and may have never occurred. Nevertheless, for over two millennia, authors and artists have linked these two incidents and used them in representations to vilify the First Emperor, and, on occasion, to praise him. This talk will examine how these atrocities have been portrayed in literature, monuments, and pictorial art from the Han Dynasty to the Cultural Revolution, with special focus on the political motivations behind these representations.

Anthony Barbieri-Low is an assistant professor at the University of California, Santa Barbara, where he specializes in the social and economic history of imperial  China.

The Sammy Yukuan Lee lectures are sponsored by the UCLA Center for Chinese Studies and funded by the Lee Family Foundation. The series was begun in 1982 in honor of the 80th birthday of Sammy Yukuan Lee, a noted collector and authority on Chinese art, particularly lacquers, textiles, and ceramics. Mr. Lee is now in his 106th year and remains an active art collector. The lectures have been held annully in recent years and this year’s event is the 21st in the series. The lecture is cosponsored by the UCLA Fowler Museum of Cultural History.

Free and open to the public. Reception to follow