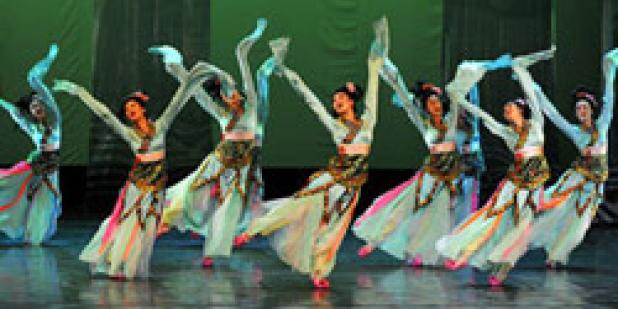 First half – a collection of classical Chinese dance

Legend has it that Chu Ling Wang, the King of Chu Kingdom, was fond of slim waist, and Chu women pride themselves for slim waist. It is a period when primitive religious rites were very popular, worshiping gods and spirits through dance became a fashion. This dance derives from historical information of Chu culture with reference of the “feather figures” on bronze drums unearthed near the border of Hunan and Guangxi provinces. It intends to show the simple and innocent dance style of pre-Qin period, magnanimously wild dance that is in contrast to subsequent dance style that emphasizes graceful beauty and charm. This dance is a classical teaching repertoire of Beijing Dance Academy.

Singing and dancing to the rhythm of foot treading is a popular form of dance in ancient China. The dance form was lost in areas dominated by Han nationality but it still can be found in some dances in remote areas where ethnic minorities live today. This dance was choreographed from cultural vestige of Wei, Jin and North/South Dynasties as well as the dance images found on excavations special to ancient Jiang Han and Qin Huai area.

The original idea of this dance comes from the terra-cotta warriors of Qin Dynasty (221-207 B.C) unearthed in Xi’an, China, which are regarded as one of the ten wonders in the world. It immerses classical Chinese dance techniques with powerful rhythm in Jiangzhou drums. The simple image of Qin warriors represents the heroic bravery of Chinese warriors.

The dance is based on Peking Opera performance with a touch of modern dance style. Dancers wear Peking Opera costume but move with modern dance style, a way to express thoughts on life and love of modern society. From technical movements on the surface to cultural heritage exploration, all points to the fact that a product comes from a specific environment. It embodies both nostalgia for tradition and perfection of modern feelings.

The second half is dance drama: The Butterfly Lovers – China’s Romeo and Juliet