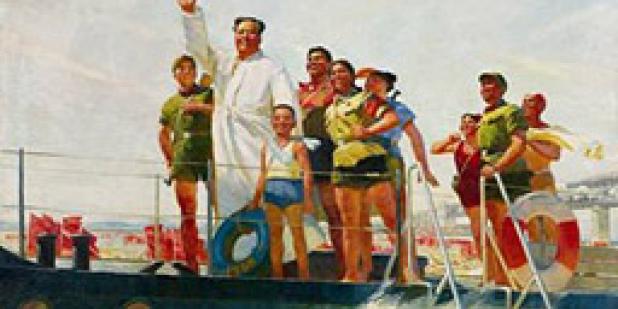 Asia Society presents Art and China's Revolution, a groundbreaking exhibition that considers the artistic achievement and legacy of one of the most tumultuous and catastrophic periods in recent Chinese history: the three decades following the establishment of the People's Republic of China in 1949. The exhibition brings together large-scale oil paintings, ink paintings, sculptures, drawings and artist sketchbooks, woodblock prints, posters, and objects from everyday life, many never before shown in the United States. It is the first exhibition to examine in-depth the powerful and complicated effects of Mao Zedong's revolutionary ideals on artists and art production in China.

"Art and China's Revolution chronicles the formation of a new visual culture in China, considering the direct impact of politics on art making in this era," says Asia Society Museum Director Melissa Chiu, a leading authority on Chinese contemporary art and co-curator of the exhibition. "Chinese contemporary art today cannot be properly contextualized without understanding the influence of Mao's revolution both on the artists who lived during this period as well as on successive generations."

Exhibition co-curator Zheng Shengtian, who was an artist and teacher of the Zhejiang Academy Fine Arts (now China Academy of Art) during this time, shares his recollections of the period in a catalogue essay. Zheng belongs to the generation of artists who grew up during the 1950s. Critical of the Red Guards for their violence and destruction of cultural artifacts in 1966, he was imprisoned in a detention center on campus called a "cowshed." "I was detained with other established artists and teachers, where we were made to participate in self-criticism sessions and our ability to paint was restricted. Even though this is a period many would prefer to forget, it is nevertheless one that produced a visual culture that continues to permeate contemporary Chinese art."

Art and China's Revolution is organized into six sections that explore themes important to artistic production and document the history and politics of this period. One section addresses artists who went against the prevailing style. These artists—including Pan Tianshou, Lin Fengmian, Zhao Yannian, Li Keran, and Shi Lu—were sometimes persecuted and called "black artists." Other sections include works by a younger generation of artists that reflect personal accounts of their experiences, including leading contemporary artists such as Xu Bing, Chen Danqing, and Zhang Hongtu, who attribute many of their artistic influences to their years spent in the countryside as part of their "reeducation." A full-color, 260-page book has been published by Yale University Press to coincide with the exhibition. It includes essays by leading political and social historians, art historians, interviews with and recollections by artists, and translations of primary documents from the period.

Background and Context
From the 1950s to 1970s, when China was led by Mao, a new visual culture emerged that was part of a broader national program of modernization. Artists were encouraged to create art that reflected the revolutionary spirit of the time, in Mao's words to create "art for the people." Oil painting in a socialist realist style replaced ink painting—which had previously been one of the most revered art forms in China—as the preferred style. Revolutionary heroes such as workers, soldiers, and peasants replaced traditional subjects such as landscapes, birds, and flowers.

State influence over artists and art production reached a height during the Cultural Revolution, from 1966 to 1976. During this time, art was often used as propaganda to deliver a political message to a mass audience. Well-respected older artists, whose ink paintings had been revered, found their work not only out of fashion but scorned as examples of bourgeois decadence. These older artists sometimes modified their works to accommodate revolutionary themes.

Many artists, however, saw their works destroyed, and were persecuted and imprisoned, while others found their works denigrated in "black painting" exhibitions. At the same time, younger artists reveled in new found opportunity, and aspired to have their paintings become "model works" that would be reproduced hundreds of millions of times in posters and newspapers.

Art, History, and Politics
One section of the exhibition is devoted to the history of the period, providing an important context for the exhibition's artworks. Archival photographs, printed materials such as magazines and newspapers and a detailed timeline provide an historical account of China, beginning in 1949 when the Communist Party established The People's Republic of China, chronicling the Cultural Revolution from 1966–76, and ending in 1979 when a major program of economic reform was initiated. Conservative estimates of the number of people who died from persecution during the Cultural Revolution are in the tens of thousands, while some recent studies have claimed the death toll to be as high as three million. Photographs document events—such as rallies and the destruction of property and cultural relics—rarely depicted in artworks. Also on display are household objects and personal effects adorned with revolutionary imagery and Mao icons, which came to permeate all aspects of daily life.

Cult of Mao
Exhibition artworks are divided into thematic sections beginning with Cult of Mao. This section examines large-scale oil paintings, woodblock prints, and posters created during the mid-1960s to mid-1970s that depict idealized images of Mao. The best of these were chosen as "model works," toured around the country, and were reproduced extensively as posters, acquiring national fame and iconic status. Younger artists, mostly born in the 1940s, endeavored to create realist oil paintings that captured the new revolutionary fervor. Artist Chen Danqing recalled this time in an interview in 2006, "Nobody told you that you could paint only Mao's portrait. Mao's image was the only thing in the world that you knew you could paint... at the time, I felt that there was no difference between [me and] the Renaissance painters—they painted Jesus, I painted Mao."

To Rebel Is Justified
Three months after the official launch of the Cultural Revolution in May 1966, one million youths gathered in Tiananmen Square to attend Mao's first meeting with Red Guards, a mass movement initially made up of radical high school and university students. The exhibition section To Rebel Is Justified examines drawings, paintings, posters, and woodblock prints, which convey the sometimes destructive revolutionary fervor of this time when art schools and universities were shut down and cultural heritage destroyed. Red Guards were encouraged to be revolutionary through the destruction of the "four olds": old ideas, old cultures, old customs, and old habits of the "exploiting" classes. Part of the famed Rent Collection Courtyard—a tableau of over 100 life-size sculptures depicting a landlord's cruel exploitation of peasants that was copied and displayed throughout China and in other Communist countries—is on view in this section of the exhibition.

Never Forget Class Struggle
Mao's wife, Jiang Qing, and her left-wing protégés claimed that there had always been class struggles in art and literature since the establishment of the People's Republic of China. Many older, master painters were criticized and categorized as part of a "bourgeois reactionary line." But the official "proletarian revolution line" was not followed by everyone. This exhibition section includes paintings by "black artists" whose works in ink were often considered too dark or foreboding for the new "red" China. A group of artists called the No Name Group, which has only recently come to light, painted landscapes in secret. Although many of these works may not appear to be radical in subject matter and form, the very act of painting them was considered transgressive and potentially dangerous.

Up to the Mountains, Down to the Villages
After two years of violent clashes among Red Guard factions that disrupted classes in schools and universities across the country, students were sent to the countryside for "reeducation." It is estimated that between twelve and sixteen million students were sent to rural China between 1968 and 1978. For many artists, this was a formative period in their lives and artistic careers.

Related Programs
Asia Society will present extensive public programming in conjunction with the exhibition to provide additional context and share first-hand personal experiences, including a curator's talk with Zheng Shengtian, Thursday October 2 at 6:30 pm; a discussion between the author and prize-winning documentary filmmaker Xiaolu Guo and the writer and critic Ian Buruma on the legacy of the Cultural Revolution on contemporary China, Tuesday, October 14 at 7:00 pm.; a panel discussion titled "After the Revolution, The Making of Modern China," October 29, at 6:30 pm; a performance by the renowned Shanghai Quartet on Friday and Saturday, October 24–25 at 8:00 pm.; and a discussion among four artists on how their experiences in the turbulent times of the Cultural Revolution affected their subsequent creative lives, Sunday, October 26 at 3:00 pm.

A film series on successive Fridays in September 12, 19, and 26, features The Morning Sun, a documentary combining rarely-seen newsreel footage, propaganda films, and first-person accounts by former Red Guards and their victims; Yang Ban Xi—Eight Model Works, depicting plays created under the leadership of Mao's wife Jiang Qing to glorify peasants, soldiers, and the Party; and an award-winning documentary, Children of the Revolution, reuniting classical musicians who studied at Beijing's Central Conservatory of Music who recall their experiences forming Red Guard units and criticizing their teachers during the Cultural Revolution. For more detailed program information and the latest information on events, please visit www.AsiaSociety.org.

About the Asia Society
Asia Society is the leading global and pan-Asian organization working to strengthen relationships and promote understanding among the people, leaders, and institutions of the United States and Asia. The Society seeks to increase knowledge and enhance dialogue, encourage creative expression, and generate new ideas across the fields of policy, business, education, arts, and culture. Founded in 1956 by John D. Rockefeller 3rd, Asia Society is a nonprofit educational institution with offices in Hong Kong, Houston, Los Angeles, Manila, Melbourne, Mumbai, New York, San Francisco, Seoul, Shanghai, and Washington, DC.

Asia Society Museum presents groundbreaking exhibitions and artworks, many previously unseen in North America. Through exhibitions and related public programs, Asia Society provides a forum for the issues and viewpoints reflected in both traditional and contemporary Asian art.