Created in 2014, when the famed contemporary artist was under house arrest, the monumental display portrays activists, prisoners of conscience, and advocates of free speech from around the world. 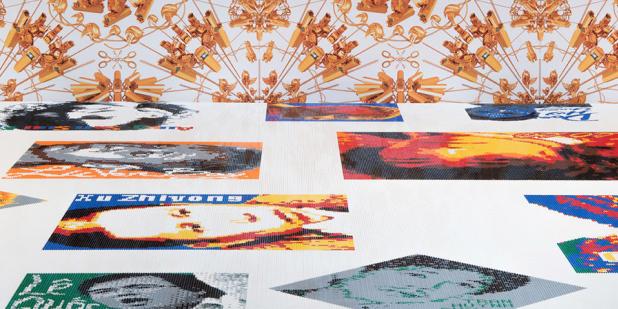 A moving depiction of courage in the face of authoritarianism, Ai Weiwei: Trace illuminates the power of resistance.

Created in 2014, when the famed contemporary artist was under house arrest, the monumental display portrays activists, prisoners of conscience, and advocates of free speech from around the world. On view at the Skirball are eighty-three of the work’s original 176 portraits, each one hand-assembled from thousands of LEGO® bricks. To Ai, the portraits pay tribute to “heroes of our time,” many of them ordinary citizens who have stood up against injustice in their communities.

Complementing the portraits is a striking wallpaper designed by Ai Weiwei entitled The Animal That Looks Like a Llama but Is Really an Alpaca. At first glance, the pattern looks merely decorative, but upon further inspection, you’ll discover hidden iconography like handcuffs and surveillance cameras. Look closely to find the alpacas—a mascot for freedom of expression in Chinese internet culture.

Ai Weiwei has spent nearly four decades exploring the relationships between art, society, and individual experience. His work, as prolific as it is eclectic, encompasses a wide range of media, including sculpture, installation, photography, film, painting, and architecture. He has extended his practice across multiple disciplines and through social media to communicate with a global public and to engage fellow artists with projects on a massive scale.

Ai attended the Beijing Film Academy and the Parsons School of Design in New York. He has received an honorary doctorate from the Faculty of Politics and Social Science, University of Ghent, Belgium (2010), as well as many international awards.