ACMS is pleased to announce we are organizing a virtual Speaker Series on YouTube!

Tune in LIVE for our next Speaker Series on Tuesday, April 28 at 9:30AM (GMT+8)/)/ Monday, April 27th at 9:30PM (EDT) on our YouTube Channel (youtube.com/c/acmsmongolia). By tuning in live, you will have the opportunity to ask questions directly from the presenter! 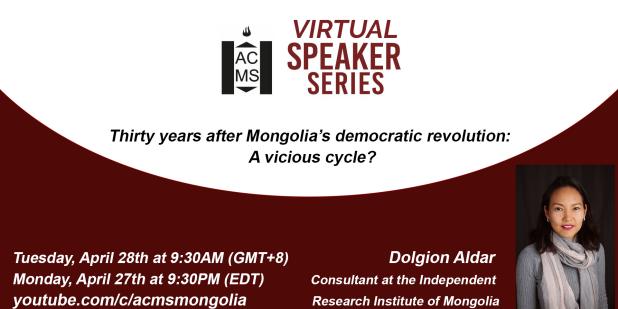 Thirty years after the fall of communism and the transition to democracy in Mongolia, fears of potential democratic backsliding in the country have begun to surface, especially in a region where authoritarian influence looms large. The Mongolian government has failed to address critical issues such as increasing socioeconomic inequality and corruption, while the country’s political processes lack the ability to engage with youth, low-income communities, and other disadvantaged groups.

Presented by Dolgion Aldar, Consultant at the Independent Research Institute of Mongolia

Ms. Dolgion Aldar is a research professional focused on promoting evidence-based policy-making and social cohesion in Mongolia. She is a former CEO and current board member of the Independent Research Institute of Mongolia, one of Mongolia’s preeminent think tanks that promotes independent research and analysis of governance and social issues in the country. She recently completed a fellowship at the National Endowment of Democracy, US to develop a report on strengthening democratic ideals and values as they relate to equality in Mongolia. Dolgion also serves as the Secretary of the Social Indicators Research Committee of the International Sociological Association and a member of the Social Well-Being Research Consortium in Asia. For her dedication to promoting democratic governance in Mongolia, Dolgion received the Asia Foundation’s Development Fellowship in 2018. Dolgion holds master’s degrees in Political Science from the University of Manchester and in Sociology from the National University of Mongolia.

The event will be held on 9:30PM Eastern Time on Monday April 27th and 9:30AM Greenwich Mean Time on Tuesday April 28th respectively.