The Asia Society Southern California’s U.S.-China Entertainment Summit is the premier U.S. event uniting Hollywood and Chinese entertainment-industry leaders to discuss business collaboration and the latest market trends. This signature annual event will be held at the Skirball Cultural Center from 8:00 a.m. to 5:00 p.m. PST. The Gala Dinner will follow at 6:00 p.m. 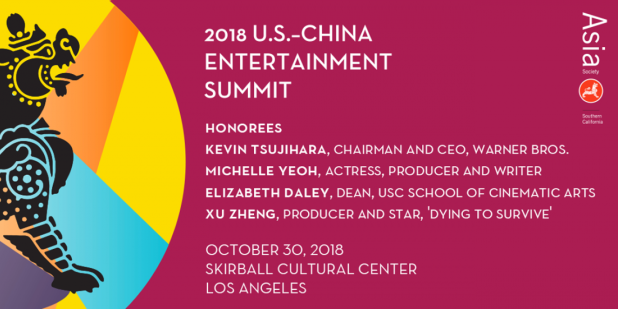 Join Asia Society Southern California for the U.S.-China Entertainment Summit, the most prestigious gathering of thought leaders, dealmakers and content creators in American and Chinese entertainment. Amid trans-Pacific tensions and economic turbulence for Chinese entertainment companies, the Summit will provide the latest market intelligence on the Hollywood-China relationship. Founded in 2010 as the U.S.-China Film Summit, it has led the conversation about co-production, cross-border investment and the integration of Chinese and American talent. The relationship has deepened and with convergence of media, the 2018 Summit will look beyond film and TV to areas were digital platforms are transforming entertainment.
Among the featured speakers are Academy Award-winning animator Glen Keane, Twitch Co-Founder Kevin Lin and Crazy Rich Asians Producer John Penotti. We will screen Xu Zheng’s film Dying to Survive. The full-day program will feature “Spotlight” conversations and high-level panels on topics including:
Courtship Interrupted?
How market challenges are affecting Hollywood’s China strategies
The Future of Streaming
The look ahead with digital pioneer and Amazon Studios COO Albert Cheng
The Making of The Meg
How the surprise summer hit became the top U.S.-China co-production ever
Chinese Directors Sink Roots in America
Rising star Cathy Yan and others tell tales from two worlds
Asian Talent Goes Global
Is 2018 a turning point for Asian talent in front of and behind the camera?
The USC U.S.-China Institute is a supporting organization. Use promo code 2018USCI for discounted tickets.
Event Website URL:
https://asiasociety.org/us-china-entertainment-summit/summit
Phone Number:
213-788-4711