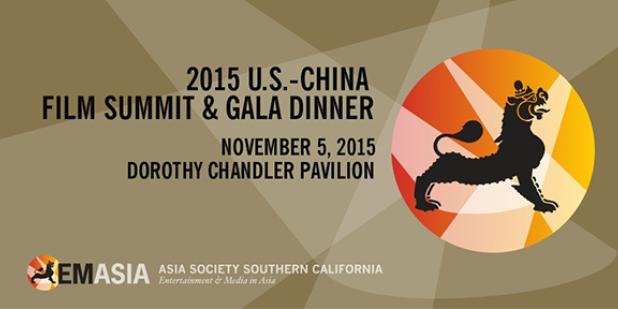 Asia Society Southern California will present the Sixth Annual U.S.-China Film Summit on Thursday, November 5, 2015. This flagship Asia Society event will be held at the Dorothy Chandler Pavilion and will run from 8:30 a.m. to 5:00 p.m. PST, followed by a Gala Dinner.
Considered the premier U.S. event uniting Hollywood and Chinese film-industry leaders to discuss business collaboration and market trends, the Film Summit will feature a day of timely, insightful panel discussions and featured speakers.
Asia Society Southern California is pleased to announce three honorees, who represent the artistic, business and educational foundation of China’s globalizing film industry.
Zhang Yimou, China’s most critically acclaimed director, will be honored for his lifetime achievement. Zhang created award winners from his very first film, Red Sorghum (1987), received an Academy Award nomination for Ju Dou (1989) and cemented his international reputation with Raise the Red Lantern (1992.) His body of work continues to grow, with the recent release of Coming Home and the highly anticipated film, The Great Wall, a major Chinese-U.S. co-production.
Zhang Zhao, Chief Executive Officer of Le Vision Pictures, will be honored for his film industry leadership. Zhang founded Le Vision Pictures, one of the largest private-sector studios in China, and has steered its impressive growth in China and abroad. Le Vision has partnered with Legendary Entertainment, China Film Co. and Universal Pictures for The Great Wall, directed by fellow honoree Zhang Yimou. Le Vision is expanding its work with other U.S. studios as well as investing in online services and related media being developed by affiliate Letv.
The Beijing Film Academy will be honored for its role cultivating talented actors, directors and entrepreneurs who have elevated Chinese film and taken it global. BFA’s distinguished graduates include directors Zhang Yimou, Chen Kaige and Tian Zhuangzhuang and leading actors, including previous Film Summit honorees Zhao Wei and Huang Xiaoming, who are at the forefront of Chinese cinema and the growing bonds with Hollywood. BFA has encouraged those ties by opening up to international students and visiting professors. BFA will be represented at the Summit by Hou Guangming, Chairman of the Academy Council, senior administrators and faculty.
“At a time of extraordinary change in film and entertainment, Asia Society’s U.S.-China Film Summit focuses on a vital constant: the deepening collaboration between Hollywood and China,” said Josette Sheeran, President and CEO of Asia Society. “Chinese filmmakers and producers have become a real force globally. Our honorees reflect film’s importance as a cultural, educational and business bridge, and Asia Society is proud to be recognizing these talents and connecting them with professionals and audiences around the world.”

Panel topics at the Film Summit will include:

​The USC U.S.-China Institute is a supporting organization. To receive the discount for registration, use the promotional code: USCIsummit2015. Click here to register.