The Cairo Conference of 1943 by Ronald Heiferman is a thorough and comprehensive analysis of the most intriguing Allied conference of World War II. It sits alongside a list of publications relating to World War II from this respected historian. For scholars of Asian aspects of the 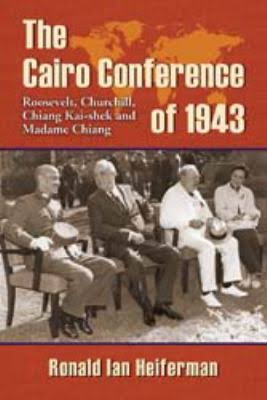 Second World War this conference is of paramount significance because it was the only wartime meeting to which Chiang Kai-shek was invited. The Yalta Conference has been historically represented as the most influential of the Allied conferences because of the role the decisions made there played in shaping the postwar world. Cairo, however, provided the backdrop for the Yalta Conference and established the foundation for the interaction between the U.S. and British leadership that followed. The Cairo Conference has been viewed as the least successful of the Allied conferences because little was achieved by way of formal agreements, and the informal decisions made there were quickly reneged at Yalta. To understand the real significance of the gathering, scholars must dig deeper into the expectations and purposes each of the Allied leaders had for going to Cairo and in what ways those expectations were met and whose purposes were achieved. Heiferman's book explores the conference on that deeper level in a way which is rarely, if at all, found in the literature to date and, as a result, he is able to show the real significance of Cairo Conference.

The first four of the book's thirteen short chapters provide the reader with the context of the conference. Heiferman establishes the setting for Cairo by analyzing the development of diplomacy between Roosevelt and Chiang through the earlier stages of the war and the lead-up to the conference in late 1943. Although it is not the main focus of the book, the analysis found in these early chapters is useful to scholars of Sino-U.S. wartime diplomacy as they provide an insightful exploration of the roles FDR, Chiang, Madame Chiang Kai-shek, T. V. Soong, and other significant figures played in diplomatic relations between the United States and China. FDR's well-noted trait of using personal emissaries rather than professional diplomats to conduct foreign affairs is explored through the envoys that he sent to China in 1942. The historical context of the development of Sino-U.S. relations in the late 1930s until 1941 is presented in the introduction to the book. Heiferman's descriptions of the visits of prominent U.S. officials to China are notable for their detail and yet they are succinct and fit into a brief chapter. Chapters 2 and 3 provide the Chinese side of the diplomatic relationship by analyzing Madame Chiang's visits to the United States and T. V. Soong's conduct of backdoor diplomacy with members of the Roosevelt administration. These two chapters are significant to the overall thesis of the book, as they provide the rationale for convening the Cairo Conference. The importance of American sympathy for the Chinese cause, and the visible display of that Sino-U.S. connection, can be seen by the conduct of Soong and Madame Chiang. Last in this group of chapters is an examination of the conversations between FDR, Chiang, and their officials that led to the planning and convening of the conference. Heiferman succeeds in providing the Chinese side of the dialogue and role that the Chinese leadership played in bringing the Cairo Conference together and this is a noteworthy strength of this book and its account of the Allied relationship.

After setting the scene Heiferman goes on to provide eight chapters that explore the events and outcomes of the Cairo and Teheran conferences. The chapters are divided chronologically, covering one or two days at a time. Breaking the gathering down into this time frame allows for an in-depth analysis of the discussions between the Allied leaders that is lacking in many works exploring the wartime conferences. Heiferman has used sources from different sides and places to provide several perspectives on most events and meetings held at Cairo. Unlike the early chapters where the source base is fairly predictable and the author relied heavily on the FRUSseries, [1] the analysis in the chapters devoted to the conference are supported by a variety of quality sources that are less regularly used in the literature on the topic. The long series of ibids found in the endnotes are the result of the heavy use of referencing by the author and not a sign that he has used a slim set of sources. Examples of the author using several different perspectives for each event to thoroughly analyze it can be found throughout the book, but as an illustration one case can be found on page 67. Heiferman describes the relationship between the Chinese leaders and their subordinates and compares them to the British and American delegations at the conference. In noting the lack of camaraderie between the members of the Chinese delegation he refers to General Arnold's memoirs and Alan Brooke's papers. Not only are different perspectives provided but sources from various countries are also referred to. It is rare to find such extensive use of British sources in books such as this, that focus mainly on the role China played in the Allies' politics, as it is generally examined from the American perspective. This is certainly a strength of this work. Heiferman completes his story with a postscript to the Cairo Conference which provides a description of Allied relations in the aftermath of the conference and fits the gathering into the context of the broader story of the war.

Chapter 12 can be labeled the climax of the book because it is in this penultimate chapter that Heiferman addresses the "turning point" thesis. He refers to Robert Sherwood's book, Roosevelt and Hopkins: An Intimate History, first published in 1948. Sherwood was Roosevelt's speechwriter, and so had remarkable access to the president. Sherwood's account of the Cairo meeting claimed that Russia's promise to join the Allies in the war against Japan after Germany had been defeated, made at Teheran, was the paramount cause of Roosevelt's shift in thinking about the role China should play in the Alliance. Operation Buccaneer was by far the most vital issue at stake during the Cairo Conference. A successful agreement on conducting the operation according to Chiang's strategy was seen as the litmus test of Chinese power in the Alliance, with far-reaching consequences for the future of that country in global affairs. Roosevelt, through most of the gathering, supported Chiang in his demand that the operation be conducted using amphibious craft, against Churchill and the British chiefs of staff who sought a much more limited operation so that landing craft could be utilized in other theatres. Hefierman contends that Sherwood is mistaken in his claim that the Soviet commitment was the driving force behind changing Roosevelt's support for Chiang on Operation Buccaneer. According to Heiferman, other accounts, such as Elliott Roosevelt's, provide evidence that undermines Sherwood's view. He cites FDR's expression of doubt about the sincerity of Stalin's promises and his greater focus on the difficulties of dealing with Chiang as the key reason for FDR's change of heart. Heiferman's evidence is convincing and his contention is valid.

It was Keith Sainsbury, however, who coined the phrase "turning point" in reference to the Cairo Conference in his 1985 book The Turning Point: Roosevelt, Stalin, Churchill and Chiang Kai-shek, 1943 (1985). Sainsbury's argument was that Cairo represented the zenith of Chinese status among the Allies in World War II. Until the conference Roosevelt was able to behave as though China was one of the Big Four. After the meeting, FDR's perception of China's role decreased significantly. Ultimately, Sainsbury argues that this was the result of a combination of factors that included Russia's commitment to join the Allies in their fight against the Japanese after Germany had been defeated, but also Chiang's personality and FDR's impression after having finally met him, along with the failure of Claire Chennault's air power strategy in China. The president had backed Chennault's plan to use air power to turn the tide against Japan in China, but despite Chennault's assurances about the soundness of his strategy he was unable to achieve his objectives. This made China geographically and militarily a less significant ally in the global war.[2] Sainsbury's thesis became the prevailing view among historians in their thinking on the role that Cairo played in Allied relations and remains so. Robin Edmonds in his work, The Big Three: Churchill, Roosevelt and Stalin in War and Peace (1991), has also explored the "turning point" thesis more recently. Heiferman's neglect of these works, and several others, in his analysis is interesting and disappointing. Although he focuses on primary sources throughout the book and addressing the contesting accounts of different aspects of the conference, some reference to the prevailing historiography should be expected.

Despite this disappointment, Heiferman's work has much to commend it. Few studies of single wartime conferences exist and this one allows a much deeper examination of the events at the meeting than can be found in many earlier works which explore the wartime conferences together. For scholars interested in Sino-U.S. relations Cairo is worthy of such attention as it held such significance for the relationship. Heiferman provides enough context to the conference itself that readers less familiar with the area can gain an understanding of why the meeting was so important. There are extensive endnotes to each of the chapters, the only problem with these being the vast number of abbreviations used to cite the works that can lead to some confusion or a long chase back up the list to find the actual source an endnote is referring to. The hunt for identification of the source is generally well worth it, though, as there are some gems among the commonly expected ones. This reviewer found the reference to a PhD dissertation on Ambassador Clarence Gauss particularly interesting, but there will be others of note for those looking to explore various topics further.

Overall, The Cairo Conference of 1943 is a well-researched and well-written addition to the literature on wartime Allied conferences and a particularly welcome supplement for scholars of Sino-U.S. relations. It has a well-thought-out thesis which is supported by detailed and thorough research. Although the contention that the Cairo Conference represented the turning point for Roosevelt's thinking about China and its role among the Allies is not new, Heiferman's twist on the explanation for it is supported by well-sourced evidence contextualized within a thorough analysis of the significance of the conference and its outcomes. This brief book will serve as an accessible guide to the Cairo Conference for anyone interested in World War II history.