Burke and Pomeranz, eds., The Environment and World History, 2009

No historical geographer with an interest in world history and its environmental dimensions should miss this book. Edited by 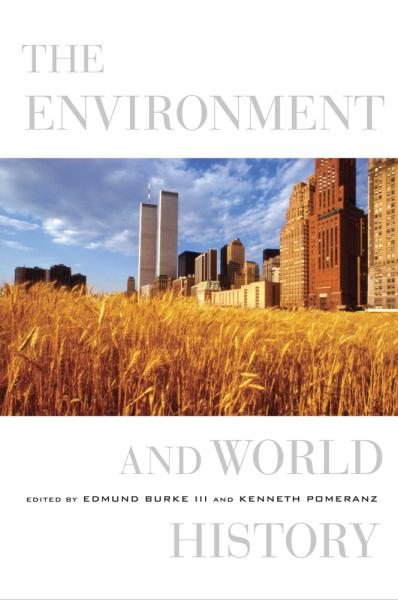 The global reach of the collection may best be described as a cumulative accomplishment. Only Pomeranz’s introduction, Burke’s essay on energy transitions, and a republished essay by the late John Richards on property rights develop a global analysis. The remaining seven chapters take up continental and regional problems of several varieties. Burke offers a synoptic environmental history of the Middle East over the very long term; Pomeranz explores the last five hundred years of Chinese environmental history with a particular focus on water; Michael Adas offers a reprise of previous work examining the rice frontiers of Southeast Asia under conditions of colonialism; Mark Cioc offers an essay on the Rhine as a world river; and Douglas Weiner examines the role of the state as a predatory institution in Russian and Soviet environmental history. Beyond these substantive essays, others offer crisp historiographical overviews, including William Beinart on Africa, Mahesh Rangarajan on India, and Lise Sedrez on Latin America. Although the attention devoted to regional explorations would seem to undercut the purpose of the volume, Pomeranz argues persuasively that they provide, rather, crucial underpinnings for studies of state formation and environmental change, long-term understandings of particular regions or places, and examinations of the local instantiations of global patterns and processes.

While all of the chapters speak to the central problematic of the book linking world and environmental history, the editors propose a wider interpretation centered on the concept of developmentalism. Developmentalism, according to Pomeranz, constitutes a broad social project found in a range of societies in the early modern and modern world defined by processes of state-building, sedentarization, and resource intensification. The term is attractive in allowing analysis to move past previous debates focusing primarily on the development and spread of capitalism, with the inevitable East-West contrasts. By refocusing attention on developmental processes in the state and on the land, new, intriguing comparative problems come into view. Of course, the concept also runs certain risks, such as placing too much weight on the state apparatus as a driver, which might make sense in a case like China, but not in other regions where early modern and precolonial states were diverse in form and relatively weak. The collection’s lack of attention to North America and Europe (beyond Cioc’s elegant essay) also begs the question of how the developmentalist thesis applies in these important and influential cases. Finally, the developmentalist project is so broad in its conception that it is difficult to see why it could not also be applied to various premodern cases. Notably, only Pomeranz and Burke work with the concept, while Richard’s chapter offers complementary cases and evidence for the interpretation. Other contributors focus on different kinds of issues, such as the impact of colonialism, or change and continuity in state forms.

Geographers will ask whether this work of world environmental history engages geographical scholarship, and the answer is, rarely. Although many of the problems at the center of the developmentalist concept and of comparative and global analysis address questions of scale, none of the authors engage the theoretical literature in human geography on scale and multi-scalar processes. This is not a great shortcoming, in my view, but it does suggest the disciplinary walls that still separate historical geography and environmental history on certain problems and approaches. The greater deficiency from a geographical perspective is the rather modest use of maps. There are only two locational maps in the entire book. Several of these chapters would have been greatly enhanced by maps charting not only locations but also processes of change, linkage, and transformation.

Reservations aside, this is a remarkable book, with no weak sections. It originated in a special seminar sponsored by the U.S. National Endowment for the Humanities Institute for College Teachers. This fact may help to explain its scope and accessibility. I would not hesitate to assign it to upper-level undergraduates and would recommend it to others seeking a good introduction to area studies approaches to environmental history as well as the emerging confluence between world and environmental historiography.