Bulag, The Mongols at China's Edge: History and the Politics of National Unity, 2002

The Mongols at China's Edge 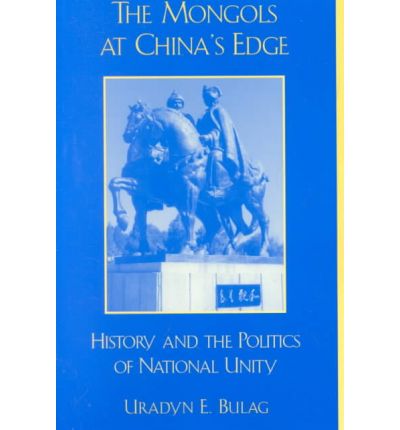 This timely work written by an Inner Mongol from China, who was trained at Cambridge University in western social science methods and theory, proves to be a welcome departure from the "my people have been abused thesis," the predominant orientation of most of the published works on contemporary Chinese ethnicity. In this study, Bulag draws upon his personal experience of growing up in Inner Mongolia, along with historical accounts and ethnographic observations, to provide keen insights into majority-minority relationships in China's Inner Mongolian Autonomous Region (IMAR).

Bulag's analysis is influenced by current anthropological discussion of ethnicity but he has not been completely seduced by that discussion. In this way, the book stands apart from the current flood of books being published on "things ethnic" in China. He correctly notes that the feminization of the minority thesis, sometimes called the eroticization of minorities, is based entirely on research conducted in southern China. As such, it is relevant only to the southern and not to the northern populations. He further observes that even the Han considered the northern minorities to be more masculine than feminine. He infers that this conceptual asymmetry in China's "gendered imagination in which southern peoples are feminized, while the northern peoples are masculinized, serves to center the Han ideal self-image as people with more of a central plain identity." This is a nice correction to the conventional wisdom which holds that the Han conception of eroticism is based on attraction to the exotic, with its minority populations cast as the most exotic. It is also an important qualification to the feminized-ethnicity or subjection thesis currently making the rounds. Bulag nicely points out that northern minorities may be subjected peoples, but they are not regarded as effeminate.

Bulag is interested in exploring in a grand Lattimorian tradition the "character of frontier politics." He also does a fine job in linking his discussion of twentieth-century land reform to the exploration of the make-up of China's ethnopolitics. There is much to contemplate here.

I especially enjoyed his in-depth discussion of the cult of Ulanhu, a Tumed Mongol born near Huhhot, the capital of IMAR, who dominated the politics of the region until his death in 1989, and was the highest-ranking Mongol in the Communist Party. His son Buhe, who eventually succeeded him as governor of IMAR, was likewise able to install other Mongols, particularly Tumed, in various responsible positions within the IMAR government. The post-Tiananmen years resulted in the introduction of more draconian policies toward minority peoples in almost every autonomous region in the PRC. This political shift combined with the passing of Ulanhu served to undermine the previous "live and let live" minority policy in Inner Mongolia, and resulted in the reversal of Buhe's political fortunes. The end result was Buhe's transfer to Beijing and the further marginalization of the Tumed elite's importance in the local political landscape. I suspect that his transfer may have been privately supported by many non-Tumed Mongols who saw it as an opportunity to increase their own political influence within the regional government.

Finally, Bulag is one of the first scholars to probe the tension between ethnic identity and national identity. He recognizes as an important factor in IMAR the layering of ethnic identities with the national identity as an important, albeit not exclusive, source of identity construction. The special strengths of this book center on the exploration of the tensions inherent in China's minority policy that offers incentives within the system to individuals as individuals and, at times, as members of a special group. Here then is the enormous paradox embedded in China's ethno-politics which are grounded in two contradictory philosophies or policies: the upholding of the ethnic group as well as of the individual right to achieve prominence within the established social order. The first precept regards an ethnic group as a corporate unit, while the second regards the individual as a separate entity from the ethnic group. These two orientations give rise to different government policies that range from soft to hard. The soft policies promote affirmative action incentives that can undermine the creation of a united ethnic front. In addition, the government employs hard policies which result in the arrest and imprisonment of anyone who publicly criticizes official autonomous region policy. Whenever the two philosophies have collided in contemporary China, as in the United States, the right of individual minorities to marry whom they want, to speak the mainstream culture's language or the minority language, to study and work where they want, and to embrace or reject elements of their local cultural heritage has been upheld. Bulag observes that the degree to which these ideals--individual achievement versus group interest--are internalized will impact an individual's sense of ethnic and national identity. His important observation will require further research by other researchers working in similar and different ethnic populations. To understand how individuals balance the push/pull of these competing ideals will constitute the next wave of research among China's minority populations. The issue of the relevant strength of Chinese nationalism as opposed to minority nationalism within a given ethnic group remains unexplored terrain for ethnic studies. We are indebted to Bulag's pioneering effort to explore how these competing cognitive and emotional allegiances are rationalized, bracketed, and defended in terms of individual and group postures toward "things ethnic," "things national," and "things personal."