The outbreak of the Korean War in 1950 illuminated a number of major developments for the United States: commitment to collective peacekeeping via the United Nations, the widening chasm between postwar liberalism and conservatism, and a growing realization that the Cold War could be waged as fiercely on the home front as it was via overseas interventions. In Between Mao and McCarthy, Charlotte Brooks describes how the conflict in Korea placed Chinese Americans in a new, if not wholly unfamiliar, situation: "Suddenly, Chinese Americans found themselves associated because of their ancestry not only with a nation at war against the United States but also with communism, a doctrine considered by most Americans to be the height of treason" (p. 105). A new chapter of racial violence and immigration exclusion threatened to begin. But the major casualty that resulted, Brooks argues, was a flattening of Chinese American political life. While the Federal Bureau of Investigation investigated leftist groups, Kuomintang (KMT) loyalists conflated loyalty to America with loyalty to the Nationalist cause. In such a climate, it was easy to miss the Chinese Americans who were neither Chiang Kai-shek supporters nor Communist sympathizers.

To do so was to overlook a major group that had been practicing its own brand of liberalism since the New Deal period. Cold War escalation, 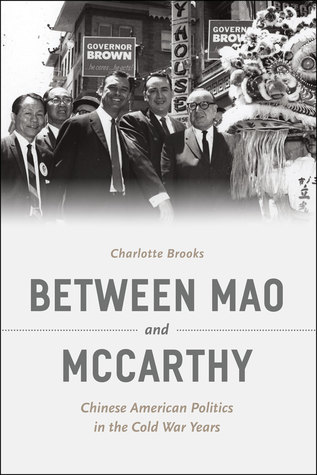 oddly combined with the persistent misconception of electoral apathy, contributed to a skewed understanding of Chinese American politics by postwar officials, and it has long colored scholarship of Asian American political history. In her meticulously researched book, Brooks brings to life a complex, obscured history of community political life. Focusing on Chinatowns in San Francisco and New York City from the 1930s through the 1960s, she traces the shape of Chinatown activism through a large cast of community leaders, newspaper editors, immigration brokers, party politicians, and students (the book even includes a "Who's Who" to help the reader keep names straight). In doing so, she makes a compelling case for studying the middle ground between left and right. The majority of politically active Chinese Americans in the two cities sought institutional participation outside of enclave borders, whether with the liberal New Deal coalition or the Tammany Hall machine. Moreover, China and "China politics" were not at the forefront of their long-term agendas, despite what the KMT hoped. Chinese American liberals were drawn to moderation as a way to build consensus with other groups, as well as take their place within the nation's electoral mainstream.

If Brooks's primary intention is to offer a broader picture of Chinatown political life, her choice to locate the narrative in two urban communities and her impressively varied sources ably support that goal. Other than the ethnic background of their inhabitants, San Francisco Chinatown and New York Chinatown were markedly distinct in their prioritization of local issues, concern for foreign affairs, and political culture in general. Brooks uses government documents from all levels, interviews, papers of civic organizations, diaries and memoirs, and local Chinese-language periodicals to portray the everyday circumstances and nature of community politics. Rather than focusing on just moments of crisis, her lengthy chronology demonstrates the impact of prolonged episodes, such as the New Deal and World War II, in addition to acute crises like the events of 1949-50. The resulting narrative effectively places Chinese American politics within the broader scope of postwar American liberalism and foreign affairs while illustrating the multidimensional nature of community activism: Chinatown politics involved sustained initiative rather than mere reaction to emergencies.

One of the benefits of such a diverse examination is the application of "Chinese American" in relation to the Cold War at home and abroad. When considering a period when national origins and questions of loyalty were intricately connected, the term takes on a fraught symbolism. Denizens of Chinatowns did not just feel an emotional connection to a faraway homeland; meanwhile the KMT actively lobbied as though they were constituents and spoke as their representative. After Chinese Nationalists lost to the Chinese Communist Party in 1949, Nationalist officials tried strenuously to convince Washington that all loyal, anti-Communist Chinese--wherever they resided--were universally in favor of KMT rule in China. Indeed the Nationalist government expected overseas Chinese to help in its anti-Communist cause by uniformly supporting the so-called special relationship between the United States and the Republic of China. Its officials and supporters considered Chinatowns as places to fundraise and rally for favorable US foreign policy, aka unalloyed support for the regime on Taiwan. Meanwhile, "ordinary Chinese Americans ... saw favorable immigration laws as their most important objective" (p. 96). The desire for immigration reform, and with it, the potential of naturalized American citizenship, outweighed the remote possibility of US support for KMT restoration on mainland China.

With this point, Brooks not only shows a distinctly pragmatic side to Chinatown politics but also illustrates how those ordinary Chinese Americans were seemingly caught between desire for acceptance in the United States and the interests that sought to use them as diplomatic pawns. She ably delineates how external perceptions of the KMT's authority were overblown. Within San Francisco Chinatown especially there was a marked ambivalence toward the regime's tactics from staunchly anti-Communist Chinese Americans more concerned with policy that would enable improved racial equality within the United States. Of course immigration policy was, and is, a major facet of international relations, but Chinese American liberals' political successes more closely resembled those of civil rights activists than they did Cold Warriors'. Their 1952 campaign to pass California Proposition 14 was a case in point. At a moment when racist sentiment was aggravated because of the Korean War, the ballot initiative proposed elimination of anti-Chinese language in the state constitution. Although uniquely shaped by foreign parties and a long history of exclusion, Chinese Americans followed the template of American consensus liberalism despite not being obvious targets of either Democratic or moderate Republican campaigning. They remained independent in their commitment to issues that mattered organically to them, whether those were immigration or a local politician's candidacy.

The book excels at identifying key instances when the push and pull of international affairs had an impact on domestic political developments. World War II, the Chinese Revolution, and the Korean War all left their imprint. Brooks describes how Chinese American veterans mobilized after 1945, pushing the Immigration and Naturalization Service to revise its treatment of incoming women and children. The 1948 election was a major turning point as an entire range of Chinese American activism--left, right, and center--voiced its support for various candidates, including Democratic Party outlier Henry Wallace. Through the 1950s, issues specific to the Chinese community dovetailed with the formation of an "Oriental" political identity that included Japanese Americans and other ethnic groups that faced similar challenges of racial discrimination and questions regarding their loyalty. Rather than keep Chinese Americans as an idiosyncratic case study, Brooks outlines their political connections with many different demographics, demonstrating the breadth of their engagement and establishing their place within the wider landscape of national life.

Although Brooks's argument regarding Chinese American liberalism is convincing, there are moments when the reader is left wondering how Chinatown leaders and activists responded to larger shifts within mainstream liberalism itself. For example, the tension between progressivism at home and the waging of Cold War might have been addressed further. Just as liberals of many other backgrounds did, Chinese American liberals surely confronted periodic conflict in their belief that an active, expanded federal state could achieve a greater good for all its citizens. Their status as an ethnic group pressured by international affairs and a government obsessed with national security would suggest that scenario was more than likely. Moreover, moderate liberalism itself was hardly uniform within the period that Brooks covers, shifting emphasis from social welfare and economic intervention to anti-Communist containment and a permanent defense state, all while attempting to hold the New Deal coalition together as social and cultural concerns dramatically changed. Although Chinatowns were in many ways insular spaces, Chinese American moderates recognized how their communities could be affected by those contexts. A delineation of how their views correspondingly altered could provide major insight into the contours of liberal consensus during a vital moment in US politics.

Toward another end of the spectrum, the American right was also undergoing a postwar renovation, thanks in large part to the China issue. Its evolution went well beyond McCarthyism, and just as there was centrist ground between extremes on both poles, different shades of conservatism began to emerge during the 1950s. Backbone issues such as commitment to permanent intervention overseas, property rights, and anti-statism drove the New Right's growth and extended well past red-baiting reaction. These were matters that resonated among voters beyond the traditional right-wing base. For instance, 1964's Proposition 14, which tried to legalize racial discrimination in the selling or rental of property, stood in stark contrast to the progressive 1952 initiative of the same name. As a flashpoint of postwar conservatism, it demonstrated California voters' deep-seated anger over perceived curtailment of property rights and individual liberty. Brooks discusses how an anti-Proposition 14 coalition united unlikely sectors of the Chinatown political scene, "from the Republican-leaning Chinese Chamber of Commerce to Chinese American Democratic Club to Greater Chinatown Improvement Committee" (p. 226). But were all Chinese Americans of the same mind-set? The predominantly white suburbs of the 1960s may not be the most obvious choice for a study of postwar Chinese Americans. However, those who moved away from Chinatowns, or barely even knew them, to settle in newer communities were bound to have different political priorities than their urban counterparts. Perhaps because the book focuses exclusively on city centers, Brooks found few voices that complemented conservatism's new iteration and so her account of Chinese American conservatism is  compartmentalized largely within outmoded KMT politics.

Above all, Brooks manages to balance micro-history with international contexts and racial politics with the politics of place. Her book is a methodically researched analysis that provides a clearer picture of a misunderstood subject. Original and valuable, it is a welcome addition to a growing historiography that recalibrates our understanding of American politics during the Cold War.