Francesca Bray has written an ambitious and powerful book. The premise which motivates the book is elegant and simple: technology is a form of cultural expression which plays a key role in the creation and transmission of ideology, and that these processes of technology are central to the historical process itself (p.367). By concentrating on the 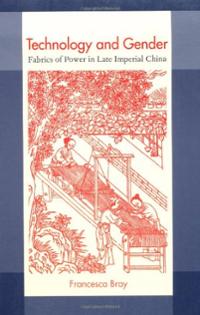 material world, and the people who produced and were produced by that material world, Bray hopes to suggest new ways of conceptualizing the long span of China's late imperial period (which stretches in her view from the Song until the early nineteenth century). She is determined that neither gender nor the material world be viewed as add-ons, as footnotes to the real stuff of a historical narrative. She by and large succeeds in showing that the success of hegemonic culture "in drawing an increasingly broad group of Chinese subjects, women as well as men, into sharing the values and practices of its particular kind of civility depended in large part on its capacity to translate its moral and social principles into material form and bodily practices (p.370)." This is an energetic book, bristling with insights and arguments. I suspect that readers of it will be inspired to elaborate on, embellish or dispute particular points. But by placing the material world at the center of her discussion, Bray has suggested new ways of looking at gender, the state and historical change. The book could be used fruitfully in advanced undergraduate and graduate classes on Chinese society and in women's studies.

Bray identifies three technological domains which are central to gender, and which, taken together, form a system, which she calls gynotechnics (p.4). These domains are technologies of space, of work, and of reproduction. The book is divided into three major sections, each devoted to a discussion of one of the domains. A substantial introduction sets the work in theoretical and comparative contexts, and a substantial conclusion provides a rumination on what the work has accomplished. The material cultures described in the book are illustrated by twenty-five woodblock prints.

The first section of the book, on domestic architecture, uses sources such as the Lu ban jing (a carpenters's manual dating from the fifteenth century), the writings about domestic architecture of the seventeenth century literatus Li Yu, and some rare surviving examples of Ming architecture. The conclusion that Bray draws is sharp and strong: not only do the general principles of domestic architecture remain constant through the late imperial period, they they also are consistent over class. Peasants do not build their houses using different principles than do princes, they merely build on more modest scales and use cheaper materials (p.74). This is an important materialist contribution to arguments about unities and diversities in Chinese culture. It is a point which is likely to spark controversy: given the nature of building materials in China (wood and earth, rather than stone) the housing of even the rich has proved ephemeral in most parts of China; it is hard to speak with certainty about how peasants in past centuries constructed their dwellings.

Bray's gaze into this domain illuminates physical aspects of daily life. Her analysis of gender seclusion, which is constructed both spatially and in the world of work, has strong spatial dimension, and her discussion of housing makes clear that the inner chambers provided women of China's elite with rooms of their own, private spaces which excluded men, spaces where women could lock cabinets, if not doors (p.139). Bray also provides us with some tantalizing tidbits about eating and the ways in which eating and sociability might have intersected in ordinary life (pp.75,101). Despite the centrality of food in Chinese culture, there was no space devoted solely to eating, no dining room, in the traditional Chinese house.

Textiles bound the inner quarters to the state, quite literally, through tax policies which until the Single Whip Reform of the late Ming collected tax in kind (grain and cloth) rather than in cash. When bolts of cloth were no longer demanded by the state as taxation, the meaning of women's work shifted, and, in Bray's words, "the spatal seclusion of the inner quarters took on new meanings of separation and dependence (p.263)." These changes are accompanied by a gradual masculinization of textile manufacture. Bray does not argue that women were less involved in textile production, but rather suggests that their economic activity was masked. She locates the late Ming as a time when women's reproductive work became more highly valued than their productive work (p.272).

But reproduction, Bray argues in the final section of the book, was not limited to biological motherhood. She includes adoption and concubinage, as well as drugs, in the category of technologies of reproduction. She argues that biological and social motherhood are quite separable in the Chinese context. This separability, if anything, reinforces rather than softens class lines--a concubine is always a concubine, no matter what becomes of her son. The hierarchies among women which are implicit in the other sections of the book are made explicit here: some women bear children for other women to mother.

In her conclusion, Bray asks whether the female culture produced by these gynotechnics is subversive, and she concludes that the answer is essentially no. She finds that it is complementary to male culture, without which male culture could not exist (p.96). Without gynotechnics, neither houses, nor clothes, nor children would be produced. She argues that Chinese writers knew that--there is no category in Chinese writing of the merely domestic. To be sure, there are hierarchies of inner and outer, but they are complementary hierarchies.

This is a book that paints with broad strokes, and one could find fault with details. One might wish tighter attention to chronologies, one might want more precise attention to changing state policies, one might want more women's voices. But what Francesca Bray has done is give us a broad outline of the gendered nature of material culture in late imperial China. It is a book that will be good to think with, and will have a major impact on the way we look at gender, technology and society in China for years to come.

Copyright (c) 2000 by H-Net, all rights reserved. This work may be copied for non-profit educational use if proper credit is given to the author and the list. For other permission, please contact h-net@h-net.msu.edu.