Meeting in Beijing, Presidents Barack Obama and Xi Jinping made a joint announcement regarding climate change and 2015 U.N. Climate Conference in Paris. The statement was issued in Beijing.
November 12, 2014
Print 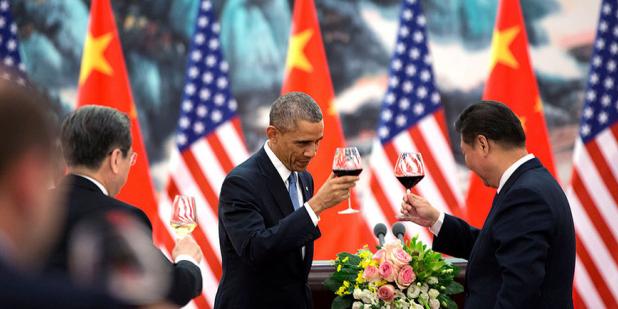 1. The United States of America and the People’s Republic of China have a critical role to play in combating global climate change, one of the greatest threats facing humanity. The seriousness of the challenge calls upon the two sides to work constructively together for the common good.

2. To this end, President Barack Obama and President Xi Jinping reaffirmed the importance of strengthening bilateral cooperation on climate change and will work together, and with other countries, to adopt a protocol, another legal instrument or an agreed outcome with legal force under the Convention applicable to all Parties at the United Nations Climate Conference in Paris in 2015. They are committed to reaching an ambitious 2015 agreement that reflects the principle of common but differentiated responsibilities and respective capabilities, in light of different national circumstances.

3. Today, the Presidents of the United States and China announced their respective post-2020 actions on climate change, recognizing that these actions are part of the longer range effort to transition to low-carbon economies, mindful of the global temperature goal of 2?. The United States intends to achieve an economy-wide target of reducing its emissions by 26%-28% below its 2005 level in 2025 and to make best efforts to reduce its emissions by 28%. China intends to achieve the peaking of CO2 emissions around 2030 and to make best efforts to peak early and intends to increase the share of non-fossil fuels in primary energy consumption to around 20% by 2030. Both sides intend to continue to work to increase ambition over time.

4. The United States and China hope that by announcing these targets now, they can inject momentum into the global climate negotiations and inspire other countries to join in coming forward with ambitious actions as soon as possible, preferably by the first quarter of 2015. The two Presidents resolved to work closely together over the next year to address major impediments to reaching a successful global climate agreement in Paris.

5. The global scientific community has made clear that human activity is already changing the world’s climate system. Accelerating climate change has caused serious impacts. Higher temperatures and extreme weather events are damaging food production, rising sea levels and more damaging storms are putting our coastal cities increasingly at risk and the impacts of climate change are already harming economies around the world, including those of the United States and China. These developments urgently require enhanced actions to tackle the challenge.

7. Technological innovation is essential for reducing the cost of current mitigation technologies, leading to the invention and dissemination of new zero and low-carbon technologies and enhancing the capacity of countries to reduce their emissions. The United States and China are two of the world’s largest investors in clean energy and already have a robust program of energy technology cooperation. The two sides have, among other things:

8. The two sides intend to continue strengthening their policy dialogue and practical cooperation, including cooperation on advanced coal technologies, nuclear energy, shale gas and renewable energy, which will help optimize the energy mix and reduce emissions, including from coal, in both countries. To further support achieving their ambitious climate goals, today the two sides announced additional measures to strengthen and expand their cooperation, using the existing vehicles, in particular the U.S.-China Climate Change Working Group, the U.S.-China Clean Energy Research Center and the U.S.-China Strategic and Economic Dialogue. These include: