Austin and Harris, Japan and Greater China: Political Economy and Military Power in the Asian Century, 2001

The Dynamic Duo in East Asia 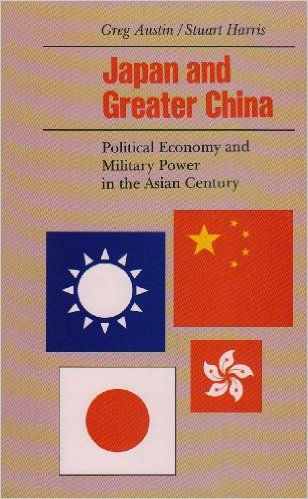 States. Technological advances made it possible for other nations to project their power onto U.S. territory. During the Cold War, Americans had been attentive to world affairs, yet with the end of that era turned inward, only to realize their folly on September 11, 2001. An observer of world affairs, on the day before the terrorist attacks, would have good reason to believe that the most likely place to draw the United States into a war would be in the Taiwan Strait or on the Korean peninsula. Even though the United States and many of its allies are waging a war against terrorism in South and Southwest Asia, the dangers on the eastern rim of the continent still remain. As a result, Greg Austin and Stuart Harris's Japan and Greater China: Political Economy and Military Power in the Asian Century serves a useful purpose in reminding readers that there are many other threats and problems in international affairs outside of Afghanistan and Iraq.

These two foreign policy scholars/practitioners are clearly well informed on their subject. Their bibliography is seventeen pages long. The 303 entries include fifty different American, Australian, Japanese, Chinese, Korean, French, and British media outlets, and most of the scholarly literature written in the 1990s on the foreign policy of these two nations. Austin and Harris also use the Internet, finding many documents on the web sites of various governmental agencies, and information from on-line databases.

The authors contend that China and Japan are status quo powers unwilling and/or unable to provide much regional leadership in Asia and the Pacific. "Overall, what has been important is that despite ... substantial differences, both governments have sustained a business-like approach to the other. It is likely that this will become more difficult, given the greater concern of public opinion in both countries about the relationship, but both governments will not abandon this approach except under extreme duress. We have noted that whatever the public feelings towards each other, there is no domestic constituency in either country for a belligerent military posture" (p. 336).

As the title of this study indicates, the authors focus on areas of traditional interest to social scientists specializing in international affairs, but there is more to this study. With regards to their approach, Austin and Harris explain, "This comprehensive assessment of the multidimensional Japan-China relationship suggests quite strongly that traditional approaches to international relations theory that analyse military or security imperatives independently of domestic social and economic imperatives are inadequate to explain the complex relations that exist between great powers at the start of the twenty-first century" (p. 5). Austin and Harris's inspection of social and economic factors is a strength of the book and is well made. Military actions, after all, are the efforts of a society to project and protect its political values, and it is worthwhile to get an idea of the forces at work in these two societies.

In their first two chapters, the authors examine some unconventional topics for their field. The two explore the place of cultural diplomacy and exchanges in the bilateral relationship of these Asian powers. An important component in perceptions of the other are the historiographical disputes concerning World War II. A continuing issue between the two nations is one of Japan issuing an apology for starting the conflict. That Japan should express its regrets in some way for initiating this war might seem obvious to most citizens of its former foes. It is a testimony to their fairness as scholars, however, that Austin and Harris provide a good and reasonable explanation as to why Japanese officials have been less than eager to express regret to the Chinese. While many Japanese nationalists continue to deny that events like the "Rape of Nanking" ever took place, influential officials and bureaucrats believe that Japan has already expressed its remorse officially. Others worry that the type of statement China desires would expose Japan to financial liability. Some see the issue as part of the Chinese Communist Party's efforts to use history as domestic propaganda and are reluctant to give this authoritarian institution tools to maintain its hold on power. Finally, a good deal of public sentiment in Japan holds that while the actions of the 1930s were wrong, they were not particularly different from those of the imperial powers in other regions of the world. While Americans who subscribe to H-Diplo, particularly historians used to being ignored by policymakers, might think that the authors exaggerate the influence of this issue, they must remember that other societies give both educators and the field of history far greater respect than that which they receive in the United States.

The next two chapters then move into more conventional territory which looks at security and territorial issues. Leadership in both Tokyo and Beijing sees the other nation as a security threat, but, according to Austin and Harris, the major characteristic defining this element of their relationship is non-aggression. Each nation is confident that there is no interest for their counterpart in using military force to resolve their differences, yet trust is largely absent from their relationship. The foreign policy objective of China over the past half-century has been the unification of the nation. Japan understands this objective, and has been quite consistent in maintaining a one-China policy. The Japanese, however, prefer the status quo or independence for Taiwan, and are investing more in the Republic of China than in the People's Republic of China. Regardless of the form of the resolution, officials in Tokyo hope that it will take place peacefully. Austin and Harris believe that Japan would respond to a war in Korea much more rapidly than they would to a military incident in the Taiwan Strait or on the island itself.

The book then moves into the economic aspects of the Japanese-Chinese relationship with an examination of foreign aid and direct investment. In both cases, the capital travels west across the Sea of Japan. Aid has had little political or economic impact on China, but many Chinese see it as their due or as reparations. As a result, while the Japanese are having little impact with this money, cutting it off would have costly repercussions. Japanese investment in China, on the other hand, has had more influence, at least in certain sectors and regions. Foreign investment from Japan has contributed to the growth of Chinese exports and most Japanese capital has found its way into the Dalian region in the northeast corner of the country. Japanese investment in China is a sign of a healthy relationship. The Japanese are encouraging economic and industrial development in the hopes of getting political and social stability. Austin and Harris conclude these chapters noting that foreign investment is a "significant and increasingly positive factor in the relationship" (p. 241).

The transfer of technology and bilateral trade is the subject of the next chapter. A key goal of Chinese economic and national security policy is to close the technological gap between itself and the major industrial and economic powers. The leadership in Beijing sees Japan as both a role model and as a ready source of advanced technology. The authors point out that in many cases China, with few trained managers, technicians, and repair facilities, has a limited ability to absorb the most modern technologies. When it comes to exports and imports, Austin and Harris argue that the amount of trade is large enough that both nations have elements in their society with an interest in keeping political relations between their governments from deteriorating. "The claim that closer economic relations between any two countries will of necessity reduce misperceptions, enhance understandings and limit the likelihood of conflict is never unqualified. But the record of Japan-China economic relations is that some connection of that sort can be made in this case" (p. 275). Perhaps, but one should remember that the biggest trading partner of the United Kingdom in 1914 and 1939 was Germany, which did little to prevent either world war. In fact, one can make a reasonable argument that economic interdependence only made the pain of these conflicts that much more severe.

In the final chapter Austin and Harris examine the regional order in Asia and the Pacific. "With the obvious exception of North Korea and the Taiwan Strait, the regional order in the Asia-Pacific basically reflects a peaceful international environment and through the ARF [Association of Southeast Asian Nations Regional Forum], the countries in the region have subscribed to norms to that end. The evidence is that this is the preference of both China and Japan, as well as of others in the region" (p. 307). Austin and Harris then describe the issues that confront Chinese and Japanese interests in the various regions of Asia. The Taiwan issue, having been the sole subject of an earlier chapter, receives little discussion here. Korea receives slightly more than three pages. The authors rightly describe the continuing division of the peninsula as an unfinished civil war just as is the situation on either side of the Taiwan Strait. Given the potential for Korea to disrupt the peaceful regional order, the brief account is surprising, particularly in light of the lengthy discussion of Taiwan.

As with most books, there are some blemishes. Austin and Harris write in a fashion best described as competent. Like many works in international relations and political science, the text is littered with acronyms. Even though the authors provide the abbreviations in parentheses immediately after the first use of the term, a glossary would be useful.

Readers should also know that they will find little human agency in this work. Social forces and institutional interests are the main forces that Austin and Harris see at work in the China-Japan relationship. This focus might not strike some as a weakness, and to be fair, the authors wrote a book focusing on the relationship between two nation-states which requires a broad view. Nonetheless, this approach combined with the fact that the authors use no Japanese- or Chinese-language sources gives the book a vague feel. Austin and Harris have identified some of the major forces at work in the relationship, but in a general fashion.

In balance, the strengths of this study vastly outweigh its shortcomings. Austin and Harris have produced a useful, innovative study that many, including policymakers--this reviewer hopes--can profit from reading if they wish to understand the recent past in East Asia.