Auerbach, Race, Law, and "The Chinese Puzzle" in Imperial Britain, 2009

Auerbach, Race, Law, and "The Chinese Puzzle" in Imperial Britain, 2009

Sascha Auerbach's Race, Law, and "The Chinese Puzzle" in Imperial Britain is a significant contribution to the scholarly literature on Anglo-American representations of China and the Chinese and on the historical experiences of the Chinese Diaspora. What makes this particular 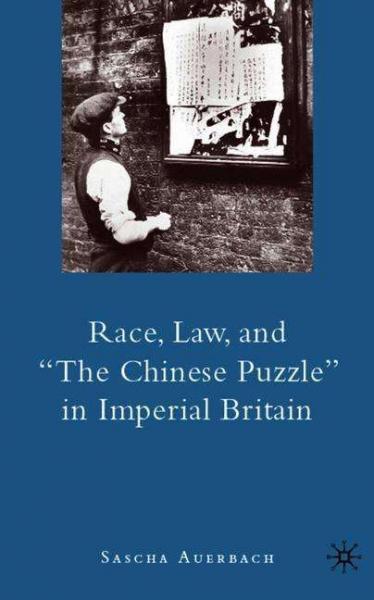 book stand out from many others is its success in delineating the symbiotic relationship between representations and praxis--in other words, the manner in which derogatory and racist media representations of Chinese people living in Britain in the late nineteenth and early twentieth centuries influenced the treatment of Chinese people in the judicial system, and how the reports of these legal judgments then in turn reinforced the ways in which the Chinese in Britain were depicted in media and literature, creating a vicious cycle of negative representation. As Auerbach himself puts it, "law and legal forums played a pivotal role in constructions of race and in the management of race relations across British society and throughout the empire" (p. 2).

Auerbach is not the first to point out the incongruity of how a community as small as the Chinese in Britain (reaching a pre-1960s peak of only 2,419 in 1931) could nevertheless exercise the imagination of the host community to an extent far out of proportion to their numbers. The Chinese, as Auerbach remarks, became "a concern for union leaders, journalists, police, magistrates, politicians, Home Office officials, playwrights and authors, and the working-class residents of London and other cities in Britain" (p. 3). Auerbach also convincingly illustrates how anxieties over degeneration within the metropolis and the vulnerability of empire were played out in depictions of the Chinese in the media and, ultimately, in the law courts.

The Chinese in Britain often found themselves caught up in the prevailing Yellow Peril discourse that had migrated from the United States to the British Isles. They were accused of not only undermining British labor through their willingness to work for low wages, but also introducing various iniquitous practices, such as fan-tan gambling, opium smoking, and the corruption of young working-class Englishwomen, the last a particular anxiety in an age when miscegenation was considered by many to be an unnatural and immoral activity and one that could even endanger the empire through eroding the supposedly immutable boundaries separating the races, the colonial masters from the subordinate natives. Auerbach is illuminating in delineating how these anxieties were first constructed by the media and then filtered through the actions of local and central government, the police, and the law courts. One of Auerbach's more paradoxical insights is into the process whereby these anxieties reached their climax in the 1920s rather than in the Victorian era, the period more usually associated with imperial hubris and scientific racism. The reasons Auerbach advances for this are generally sound and persuasive, grounded as they are in the perception of domestic decline in the years following the sacrifices of the First World War.

Although within the remit of his study Auerbach's conclusions are sound, the one weakness is his interpretation of several of his literary sources, an issue that foregrounds something more widely prevalent in a number of other recent studies, all of which emphasize negative representations of the Chinese (two examples of this being James Hevia's English Lessons: The Pedagogy of Imperialism in Nineteenth-century China [2003] and Robert Bickers's  Britain in China: Community Culture and Colonialism, 1900-1949 [1999]). All of these works are to a greater or lesser extent embedded with the Saidian model wherein all representations of the Asian Other are invariably hostile. One would imagine from reading these works that all representations of the Chinese in this period were univocal, imbued with varying elements of contempt, fear, or hatred of the Chinese. The fact is that for every denigrating reference to the Chinese, whether in Britain or elsewhere, one could just as easily cite another that is complimentary or admiring. There is, conversely, another, albeit largely unexplored, avenue to explore British representations of China and the Chinese in this period, one that would reveal something more akin to the eighteenth-century Enlightenment, a time when the sheer Otherness of China served as a mirror reflecting back the deficiencies of European society, culture, and politics, when representations of China by the Jesuit missionaries in China and others could be wielded as finely honed weapons in the ideological struggles against the ancien régimes.

This is, of course, not Auerbach's concern, which is fine. But, as I have intimated, his interpretation of several literary texts, although perfectly sound in other instances, can on occasion lead him to miss certain nuances that provide somewhat different perspectives. Take, for example, his reading of Sax Rohmer's Dope: A Story of Chinatown and the Drug Traffic (1919), a novel inspired by a notorious legal case involving illicit drugs and death by misadventure that generated an anti-Chinese media frenzy at the time. Rohmer, the creator of the hugely influential Fu Manchu, aptly described by himself as "the Yellow Peril incarnate in one man," wrote other novels that also addressed the putative Chinese menace to the "White Race," Dope being one of them.[1] Dope is a repellent novel--racist, anti-Semitic, and xenophobic, and mired in reactionary politics. But where I differ from Auerbach is that, despite its subject matter, and surprisingly perhaps, I do not see it as a sinophobic work. For instance, although the novel's Chinese criminal mastermind is described by Auerbach as "the diabolical Sin Sin Wa," I see him as a surprisingly sympathetic character, for all his inscrutable cunning and amorality (p. 144). Interestingly and significantly, it is Jews and "half-castes" and not Chinese, who are portrayed as the primary threat to the hegemony of the Anglo-Saxon race. And considering Auerbach's concerns I was puzzled that he chose not to cite a rather illuminating and generous observation of Rohmer's: "Distrust of the police resides deep within the Chinese heart; for the Chinaman, and not unjustly, regards the police as ever ready to accuse him and ever unwilling to defend him; knows himself for a pariah capable of the worst crimes, and who may therefore be robbed, beaten and even murdered by his white neighbours with impunity."[2] The rather lurid prose aside, this is exactly Auerbach's indictment of the British police, the British judicial system, and the prevailing antiforeign hysteria. Something much more
nuanced is going on here than Auerbach gives credit for.

Yet this minor caveat aside, Race, Law, and "The Chinese Puzzle" in Imperial Britain is a welcome addition to the growing literature on the history of the encounter between Chinese migrants and host communities. Auerbach's wide-ranging and eclectic survey of sources is a particular strength of this book, and the illustrations, although not numerous, complement the text well. On a final note, for those interested in the issues raised by Auerbach, I would recommend Piccadilly, a 1929 British film starring the American-Chinese actress Anna May Wong. It provides a fascinating and, for the time, a nuanced glimpse into how London's Chinatown, located in the Limehouse district of the East End, was constructed in the British imagination during the interwar period. The film, which is particularly concerned with negotiating anxieties over Anglo-Chinese miscegenation in what Auerbach refers to as "the fog-bound labyrinth of Limehouse," is a fitting codicil to the tales of injustice and misrepresentation that his book details (p. 192).

Republished with the permissions of H-Albion.