Alden and Chichava, eds., China and Mozambique: From Comrades to Capitalists, 2014

This edited volume was reviewed by Joseph Hanlon for the H-Luso-Africa discussion list and is reprinted here via Creative Commons license.

Reviewed by Joseph Hanlon, The Open University and London School of Economics

China's growing involvement in Africa leads to a wide series of generalizations. But there is no unified policy, and instead there are a wide range of individual actors, including national, provincial, and private companies and various agencies all looking to Africa. This book by Chris Alden and Sérgio Chichava provides the best overview, so far, of China's involvement in one country, Mozambique. 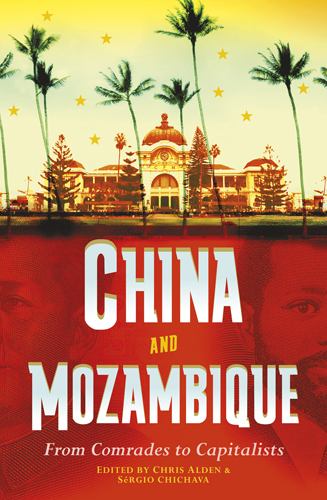 The book sets out a long history of Chinese involvement, tracing the colonial era at the end of the nineteenth century, support for Frelimo in the liberation war, and then some limited support in the early years after independence. But the contemporary Chinese involvement starts in 1998, with Mozambique looking east and a visit by President Joaquim Chissano to China, and China looking more closely to Africa and adopting its "going out" policy in 1999 to encourage Chinese investment abroad, particularly by national-government-owned and province-owned companies.

This is an edited collection with twelve chapters and ten authors. Half the book is written, sometimes with other authors, by Sérgio Chichava, scientific director of IESE (Instituto de Estudos Sociais e Económicos, Institute of Social and Economic Studies), Mozambique's best think tank. Four chapters set the context and draw conclusions; two look at banking and investment; three are about agriculture; and three chapters look at the Chinese in Mozambique.

The growing role of China in Africa has caused some paranoia among the traditional donor agencies and their researchers, and in part the book debunks some of the exaggerations, at least as applied to Mozambique. The agenda of the book is set by Sigrid-Marianella Stensrud Ekman in her chapter on agriculture: "reports regarding Chinese agricultural investments are greatly exaggerated, and ... the underlying drivers for Chinese interest in the Mozambican agriculture sector are not a direct concern for domestic food security" (p. 85). Indeed, as the book makes clear, the main Chinese involvement in Mozambique so far has been in timber and construction, both areas which involve substantial corruption and are also important in the growing alliances between Chinese entrepreneurs and the Mozambican bourgeoisie.

There is a huge Chinese demand for African hardwoods and that trade is largely run by Chinese small-business owners, often without formal Chinese government contacts. This is not discussed in detail in the book, and after the book was written has been subject to a major crackdown in Mozambique.[1]

Construction is very different. It is often funded either though aid projects and World Bank loans, or by Chinese export credits. Chinese construction companies are investing and establishing bases in Mozambique, and win tenders through low prices. The chapter by Morton Nielsen, provocatively entitled "How Not to Build a Road," looks at the use of poorly trained Chinese labor and the difficulties with Mozambican workers. João Feijo's chapter, "Mozambican Perspectives on the Chinese Presence," also looks at poor labor relations, including lack of training, poor health and safety conditions, and limited interaction between Chinese and Mozambican workers. But Feijo also notes similar criticisms of other foreign companies.

Although farming and food are not the priority of the Chinese, it is the issue that attracts international attention and is also the priority for Alden and Chichava. There have only been moves in two areas. China has set up a series of technology and demonstration centers (as they have elsewhere in Africa); progress has been slow because of institutional, cultural, and language difficulties.

And the three farming projects so far have medium-size core farms using old state farm land, rather than having large tracts of land, as claimed in the land-grab campaigns. The agricultural context is updated in Kojo S. Amanor and Sérgio Chichava, "South-South Cooperation, Agribusiness, and African Agricultural Development: Brazil and China in Ghana and Mozambique," which underlines the growing importance of Chinese investment in contract farming, where peasants produce rice and cotton for the Chinese companies.[2]

Sérgio Chichava, in his own chapter, "Chinese Rice Farming in Xai-Xai," argues that "like other foreign investments in Mozambique, Chinese investment is being primarily appropriated by local political elites for their own benefit" (p. 121). His chapter is about a rice project near Xai-Xai in the Limpopo River valley. The outgrower group selected included the wife of the governor, the Frelimo provincial party head, the local district administrator, and others, many of whom had no agricultural experience. Chichava notes that "the Xai-Xai project seems to benefit the local elites more than the ordinary people" (p. 121). Meanwhile, the project passed from one company in Hubei province to another, and both companies seemed to be having the same sorts of problems that affect European agricultural investors.

Indeed, one of the central problems of reporting on foreign investment in Mozambique (and elsewhere in Africa) is that investors gain land concessions or informal approval of projects, and then go looking for money. Many of the European and US proposals promise huge profits from valuable farmland or rich mines; for example, the Hoyo Hoyo agricultural scheme promised investors an impossible 40 perce t per year rate of return. Some are stock market scams, while others are genuine projects but poorly thought out. Indeed, no new plantation investment in Mozambique has succeeded since independence in 1975--neither state nor private plantations have worked, and even the Xai-Xai project is not yet profitable. Thus there have been formal announcements of massive Chinese farming projects in the Zambeze River valley, of Chinese investments in huge dams, and of Chinese industrial projects, but the money was never organized and they never went ahead. The assumption that the superior knowledge and experience of Europeans or Chinese is all that is needed to make profit in Mozambique leads to some harsh shocks.

That points to a broader issue--that writers about China in Africa are not looking back at the history of aid to Africa. World Bank projects in the 1960s were often building desperately needed infrastructure, although sometimes badly designed and constructed. Bilateral aid was usually loans, and often tied to purchases or contractors from the donor country. And aid was not just linked to trade, but often to taking the right side in the Cold War and voting appropriately in the UN. Roads and bridges remained vital for Africa, and as the World Bank moved away from infrastructure lending, the gap was filled by the European Union and the Soviet Union. And the same mistakes are made each time--lending too much and projects that were inappropriate, unsuitable, badly designed, or badly built. Shirley Williams, in her autobiography, _Climbing the Bookshelves _(2009)_,_ claimed the Soviet Union sent snow ploughs to Ghana, along with road-making equipment.

And Mozambique has seen the whole spectrum: corrupt dam-building in the colonial era, expensive donor roads that did not survive the rains, a World Bank railway rehabilitation condemned by its own inspectorate for deliberately ignoring local expertise, and oversized and inappropriate eastern European agricultural equipment for state farms. And the politics: food aid in the 1980s was conditional on Mozambique joining the IMF and World Bank and allowing in United States nongovernment organizations. In the last two decades, aid and diplomatic services have been increasingly bent to encourage Mozambique to favor contracts and investment proposals from donor country companies.

As China moves to recapture the global status it had three centuries ago, aid to Africa becomes one necessary component. And China is simply following a path trod by the West and then the Soviet Union--starting with the infrastructure that Africa needs and wants, then moving on to aid and trade packages, and supporting its own growing transnational corporations. And it is also starting as the West did, assuming that it merely had to teach Africans the best way to do things, as shown by China's agricultural demonstration centers. Donors and lenders, including China, tend to assume they know best and merely have to show the way; recognizing the importance of local knowledge takes time and requires the national government to take power, which has not happened yet in Mozambique.

The power balance is shifting as China becomes a player big enough to challenge the IMF and the West in Africa. But as this book shows, in Mozambique China has become just another large donor, learning fast as it catches up.