William Overholt argues that as China reaches a threshold where success has eliminated the conditions that enabled miraculous growth, Xi Jinping is pursuing the riskiest political strategy of any important national leader. Alternative outcomes include continued impressive growth and political stability, Japanese-style stagnation, and a major political-economic crisis. 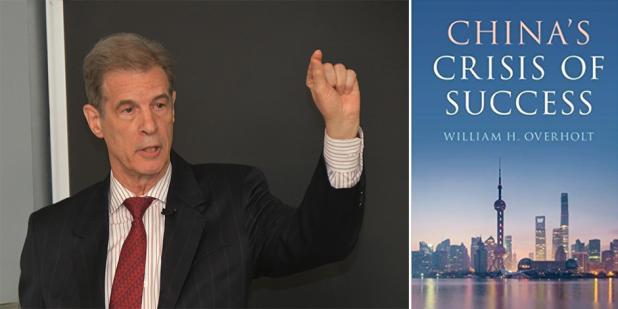 About China’s Crisis of Success
In 1993 William Overholt published The Rise of China: How Economic Reform is Creating a New Superpower, a controversial forecast of success based on the its emulation of the earlier Asian miracles; that forecast was initially ridiculed, then later acclaimed as prescient. In 2012 he called for a reassessment of China’s prospects based on divergence from the paths of earlier successes. His new book, China’s Crisis of Success, argues that China is like an entrepreneur whose business success reaches a threshold where success can only continue if it transforms itself (e.g., with professional accounting, professional HR, and much else). Above all, success has created an exponential rise in the complexity of economic and political issues. China’s leadership has responded with a brilliant plan of economic transformation, but has political problems with implementation of key reforms, and has no comparable model of political transformation.
By applying comparisons with other emerging countries, China’s Crisis of Success reveals China’s core strengths and weaknesses, in the process potentially revolutionizing much of our understanding of China. On one hand, other than human rights China has served the needs of its people much better than most Western theories acknowledge. For instance, contrary to widely accepted political analyses, Chinese communism is not uniquely susceptible to corruption and environmental degradation; developing democracies like India are much worse. Moreover, contrary to the most highly regarded economic theorists, China is far more economically inclusive than its democratic counterparts at similar levels of development; for instance, homeownership is 20 percentage points higher than the U.S. Moreover, China’s administrative system, denigrated by respected Western analysts as crippled by factionalism and incapable of long-range planning, actually demonstrates extraordinary strengths.
Comparative analysis also reveals China’s weaknesses. There is no widely applicable Beijing Model; China’s path can only be emulated countries experiencing certain extreme conditions and even then only for a limited time. Xi Jinping’s extraordinary ability to eliminate rivals does not necessarily convey comparable ability to implement reform policies. Implementation of those policies at a time of financial stringency requires paying a heavy price in economic growth and political support and so far the leadership has been unwilling to pay much of that price. Lack of this leaves China in a crisis of success: a big success, a proportionately big crisis, and resulting uncertainty as to whether the future will bring continued political and economic success, stagnation, or collapse of the model.

About William Overholt
Dr. William H. Overholt is a member of the USC U.S.-China Institute’s board of scholars. He holds a research position at Harvard's Kennedy School and is Principal of AsiaStat LLC, a consulting firm. Previously he held the Asia Policy Distinguished Research Chair at RAND's California headquarters and was Director of RAND's Center for Asia Pacific Policy.
During 21 previous years in investment banking, he served as Head of Strategy and Economics at Nomura's regional headquarters in Hong Kong from 1998 to 2001, and as Managing Director and Head of Research at Bank Boston's regional headquarters in Singapore. At Bankers Trust, he ran a country risk team in New York from 1980 to 1984, then was regional strategist and Asia research head based in Hong Kong from 1985 to 1998.
At Hudson Institute 1971 to 1979, Dr. Overholt directed planning studies for the U.S. Department of Defense, Department of State, National Security Council, National Aeronautics and Space Administration, and Council on International Economic Policy. As Director of Hudson Research Services, he did strategic planning for corporations.
Dr. Overholt is the author of seven books, including Asia, America and the Transformation of Geopolitics (Cambridge University Press and RAND, 2007) The others are: The Rise of China (W.W. Norton, 1993), which won the Mainichi News/Asian Affairs Research Center Special Book Prize; Political Risk (Euromoney, 1982); and (with William Ascher) Strategic Planning and Forecasting (John Wiley, 1983). He is principal co-author of: Asia's Nuclear Future (Westview Press, 1976) and The Future of Brazil (Westview Press, 1978). With Zbigniew Brzezinski, he founded the semi-annual Global Assessment in 1976 and edited it until 1988.