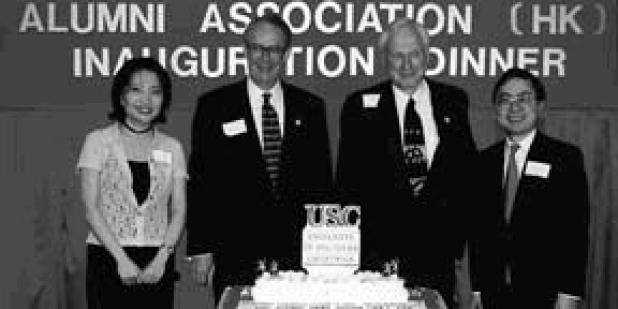 by Eric Mankin
Originaly published on June 16, 1997 in USC Chronicle

It was unprecedented, it was ambitious, it was successful.

"I do not know of any university that has ever sent such a large and high-ranking delegation of trustees and senior administrators," said Richard L. Drobnick, vice provost for international affairs, who helped organize the trip.

USC party enjoyed. President Suharto of Indonesia gave the delegation a 90-minute meeting. Tung Chee-hwa, the man who will take over July 1 as Hong Kong's leader when the British depart, was almost equally generous with his time, as were former prime ministers Kiichi Miyazawa and Yasuhiro Nakasone of Japan.

In foreign travel, trustee Herbert J. Klein is not easily impressed: among scores of other trips, the editor-in-chief of Copley Newspapers traveled to China with Richard Nixon and Henry Kissinger. But even on Klein's scale, the USC Asia venture was something special. "It was a great experience - it exceeded anything I had anticipated," Klein said.

It was a trip that will exert a continuing impact on USC - and may even lead to the opening of a South-East Asian Studies Institute (see story below).

The aims of the tour - which visited Tokyo, Hong Kong and Jakarta, with an additional stop for part of the group in Shanghai - were built around the university's Strategic Plan, which calls for internationalization westward to the Pacific Rim region, using the unique resources of the Los Angeles region and USC's traditional strength in Asian alumni as a base.

"When you look back to the U.S. from Asia," explained President Steven B. Sample, "you see how Asian cities are homogenous; Tokyo is almost exclusively Japanese, Beijing is Chinese, Seoul is Korean and so forth. But wherever you go, it's hard to find an educated Asian who doesn't have some connection to Southern California - a degree from a California university, or relatives living, working or going to school here," he said.

"The United States is not only the leading economic power of the Pacific Rim, but it is also the only place that all these ethnicities come together. It may create problems for us in Southern California to have 83 cradle languages, but it is also an asset," Sample said.

"For the trustees, this trip made the policy a concrete reality, not an abstraction. Now, when we are talking about the Asian initiative at board meetings, it will have a real meaning in the minds of many board members. The members of the board took away firsthand knowledge that all the reports we could ever write couldn't equal," he said.

Board chairman Malcolm R. Currie agreed: "It absolutely solidified sentiment on the board regarding the Asian initiative."

At the same time, Sample said, "the presence of the board made a lot of points for USC in Asian eyes. It got the attention of business and political leaders throughout Asia. It was heartening and inspiring to our alumni and research partners in the region."

Sample emphasized that the trustees who came did so at their own expense, a sizable investment not just of money but of time taken off from business.

"It signified real dedication to the university," Currie said. "I don't know many boards who would do this."

The trustees worked hard, Sample said. "At one point, we had five major meetings in one day - and then we came back to our hotel and hosted a reception for 300 alumni. The trustees didn't bunch together - they fanned out, they shook hands and they got to know people." Trustee William Siart said he went "because I thought from the point of view of marketing and perception, this was a very good thing for USC. A number of individuals I met there told me how important it was that we showed the flag," demonstrating the importance USC accords Asia in its plans.

"Clearly every trustee enjoyed the trip personally," Klein said. "It also expanded the recognition of USC among the leadership class of the countries we visited and gave us ideas on how to develop USC."

Klein said he was impressed by USC's clout in Asia, as shown by organizers' ability to arrange personal meetings with top leaders. "The interest of our alumni was tremendous. We found them in leadership positions, still maintaining ties and loyalty to USC. In Hong Kong, for example, we met Lily Chiang, who is a friend of the new governor - she was able to arrange for us to have a full-hour interview with Mr. Tung. Likewise, in Indonesia - I don't know anyone else who spent 90 minutes with Suharto."

"Relationships are built over a long time," Sample said, "and the international initiative is not something whose goals can be achieved in three or five years; it's something you have to work at for along time and be committed to get results. But we are committed - and I believe we will see results."

Provost Lloyd Armstrong Jr., who is responsible for turning the goals of the Asia initiative into tangible form, said he, along with the rest of the delegation, was struck by the sense of opportunity and optimism, along with the obvious success, shown by the USC alumni who welcomed them everywhere.

Armstrong noted that the burgeoning economies of the region have created a growing middle class that wants to educate its children - but the university infrastructure still lags far behind demand.

USC will try to tap into this trend by stepping up efforts to recruit students through the region. The university already has regional offices in Jakarta and Taipei that will emphasize recruiting; two more such offices are likely to open this year, though locations have not yet been decided.

Armstrong said that the presence of so many Asian students on the USC campus also creates opportunities for American students to build relationships with their international classmates. A committee is now working on a set of recommendations on how to encourage this process, with a report expected this year. Raising money for the creation of a residential facility aimed at furthering this goal remains a top priority.

The International Affairs faculty committee has already recommended the creation of a South-East Asia Studies Institute, focusing on Indonesia and Malaysia. "I came back convinced this is a good idea," Armstrong said, assuming funds can be raised and faculty of distinction can be recruited.

"We also need to beef up our existing Asian Studies efforts; we don't have enough experts on East Asia," he said. Bridge funding for recruitment of six senior faculty has already been allocated, Armstrong said.

Steven B. Sample presents a signed copy of a recent book on leadership by University Professor Warren Bennis to Bustanil Arifin, president of Berdikari Inc. and a former Indonesian cabinet minister. Arifin arranged the delegation's meeting with President Suharto of Indonesia.