Faculty and students present results and other observations from their 2008 election observation trip to Taiwan. 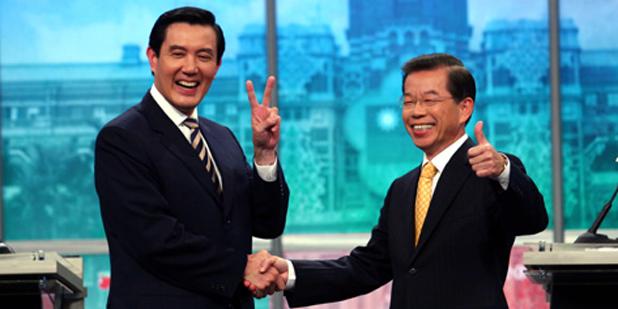 On Saturday, March 22, Kuomintang (KMT) candidate Ma Ying-jeou was elected president of . Although many news organizations reported that the race had tightened and might be affected by events in and around , Ma defeated the Democratic Progressive Party (DPP) candidate Frank Hsieh (Hsieh Ch’ang-t’ing) by a wide margin, 58.5% to 41.6%.

As the DPP’s Chen Shui-bian is the two-term incumbent, these results are taken primarily as a repudiation of the party’s efforts to manage the island’s economy. In January, KMT candidates received 53.5% of the votes cast in the legislative elections, to the DPP’s 38.2%. Because some legislative seats are awarded by locality and some by the proportion of the vote each party receives, the KMT now holds three out of four legislative seats. It is the first time since 2000 that political power in has been concentrated in the hands of one party. Both candidates pledged to work to improve ties with the and with and to foster economic development. Voters overwhelmingly decided that Ma, formerly vice-chair of the government’s Mainland Affairs Council, Minister of Justice, and mayor of , was more able to deliver on such pledges.

On March 26th, the U.S.-China Institute hosted a symposium exploring the campaign, the election process and results, and what Ma’s win means for and its relations with the and with . The symposium received extensive media coverage and video of the presentations will soon be available at the USCI website.

There was broad consensus that a second peaceful transfer of state power from one party to another signals the robust health and stability of ’s democracy. Nearly all of the speakers spent the past week in observing the campaign, the election, and its aftermath. USCI’s Clayton Dube (click here for 2.7 mb pdf presentation)opened the symposium explaining that understanding ’s politics is of critical importance for the institute. He cited a Committee of 100 poll showing that most Chinese believe that is the most likely problem to emerge in U.S.-China relations. After highlighting the increasingly close economic ties between Taiwan and China (with an estimated one million people from Taiwan working on the mainland and two-way trade now totaling more than US$100 billion), Dube traced the transition of Taiwan from a one-party dictatorship under the Kuomintang (KMT or Nationalist Party) to a vibrant democracy.

USC political scientist Stan Rosen (click here for 1.5 mb pdf presentation) has been following elections in since 1991. His presentation focused on campaign advertising. He believes that while there were ugly incidents in the campaign and that some of the campaign’s newspaper ads were quite pointed and perhaps misleading, the overall campaign was considerably less vicious than others he has observed. This is especially true in comparison to the 2004 campaign which included posters likening Pres. Chen to Adolf Hitler, Osama bin Laden, and Saddam Hussein. sociologist Wu Jieh-min noted that the vote sent a clear message to the DPP that its emotional plea to voters’ sense of ’s uniqueness was no longer enough to carry the day. He argued that the party must cultivate a new generation of leaders who better understand and reflect the concerns of ordinary people.

Meg Young, a USC graduate student, reported on voting regulations and procedures (click here for pdf presentation). In her view, the number of ballots declared invalid (0.9%) was abnormally high and she argued that needs to create a system of absentee voting so as to not disenfranchise Taiwanese far from their place of registration. Young, who completed an internship with ’s Government Information Office last summer, went on to comment on the public diplomacy effect of the elections. She noted that the government worked hard to facilitate global coverage by welcoming more than 600 foreign journalists and organizing a wide variety of scholarly panels as well as press conferences with party operatives. Pauline Yang, a USC undergrad, focused on women in Taiwanese politics and government. She noted that a quota system guarantees a certain number of places in government and that has had a female vice president in Lu Hsiu-lien (Annette Lu). Beyond this she found young women in were more politically engaged than those in the U.S. Damon Ferrara, another USC undergrad, reported on the importance of young voters in this election and shared the results of a survey he conducted (click here for pdf presentation). In 2004, an estimated 60% of voters between 20 and 29 cast ballots for the DPP’s Chen Shui-bian. Given that the 2004 election was decided by fewer than 30,000 votes, this was a decisive factor in Chen’s reelection. In 2008, such voters joined every other age group in backing Ma.

USC international relations professor Dan Lynch (click here for Lynch's essay) argued that Ma was able to win Saturday because he had evidenced a commitment to as . This includes Ma’s efforts to learn and speak Taiwanese and his assertion that any decision regarding ’s formal relationship with would be made by the people of . Lynch believes that while Ma’s interest in forging greater economic ties with pleases , his adoption of identity  will eventually lead Chinese authorities to consider him a troublemaker. Tom Gold, a sociologist who has been studying and writing about since the 1980s, focused his comments on ’s vibrant election culture. He observed that while voter turnout remains high (76%), the number of large rallies has dropped and those that were held didn’t match the scale of previous campaigns. Gold stressed the challenges that Ma faces in reforming the KMT, a party that in previous decades distinguished itself as lethargic and corrupt. Gold was much less certain than Young about the utility of an absentee voting system, noting that while those temporarily working or studying outside Taiwan deserve a voice in who governs them, those who have elected to make their primary residence elsewhere do not deserve such a voice. Some estimated that 250,000 people returned to to cast ballots, with perhaps 200,000 coming from and perhaps 5,000 from the area.

An audience of over 90 joined in the discussion with the USCI panel members.

Most questions from the audience focused on the difficulties both the Kuomintang and the Democratic Progressive Party confront. The Kuomintang, as Rosen and Gold noted, values seniority too much. Rosen pointed out that in 2004, the KMT nominated their most senior official, Lien Chan, even though he’d only managed to garner 23% of the vote four years earlier. Lynch noted that the KMT had won by becoming Taiwan-centered, a position that the DPP previously owned. Gold noted that while the national DPP leadership may have lost credibility with a majority of voters, there are others who are gaining local level experience who could help reinvigorate the party.