The exhibit commemorates the 10th anniversary of the Hong Kong Special Administrative Region. 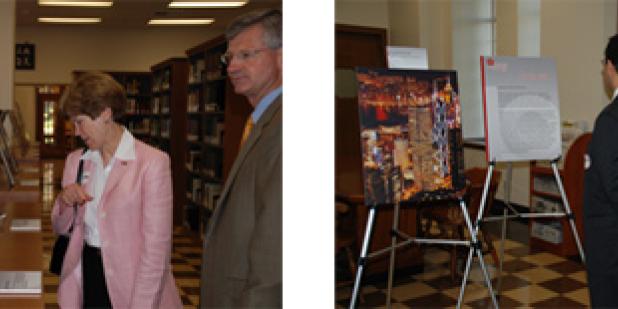 By Dan Knapp and Bill Dotson

On July 1, 1997, the People’s Republic of China assumed sovereignty over Hong Kong after its 145 years as a British colony. To mark the first decade of “one country, two systems” rule, Chinese Consul General Zhang Yun, USC Provost C. L. Max Nikias, Vice Provost for Globalization Adam Clayton Powell III and more than 100 invited guests gathered in the East Asian Library for the opening of the Hong Kong 2007 exhibition.

“We’re delighted to have the opportunity to co-sponsor this exhibition with the Consulate General of the People’s Republic of China,” said Clayton Dube, associate director of the USC US-China Institute. “Enhancing understanding of places such as Hong Kong is part of USC’s core mission.”

Noting the community of 7,000 international students at USC and the university’s strong ties with Hong Kong, Powell said, “USC is committed to expanding our efforts to internationalize teaching and research, and Hong Kong is a big part of that. We’re constantly exploring ways to build our relationship with the People’s Republic of China and the Consulate General of Los Angeles.”

“The images from the exhibit show that Hong Kong remains open, stable, prosperous and vibrant,” said Zhang. “I would like to extend my deep appreciation to USC and the USC US-China Institute for all their efforts putting together this exhibition.”

“The Hong Kong 2007 photo exhibition brings to Los Angeles some of what makes Hong Kong one of the world’s most dynamic cities,” said Dube. “There are images of the remarkable and ever-changing skyline, of some of the world's busiest transportation hubs, of work, of play, of commerce, of worship and of innovation.”

The photographs were commissioned by China’s Ministry of Culture and will be on view in Doheny Library through July 1. The official grand opening of the renovated East Asian Library spaces will take place this fall.

“Holding the exhibition at the new East Asian space at Doheny Memorial Library is a special privilege,” said Dube. “Doheny is the university’s flagship library, and the new East Asian reading and seminar rooms are extraordinary.”

“With the additional business and technological support,” Dube added, “the East Asian Library will be even better able to support the path-breaking research and innovative instruction the East Asian faculty is known for.”

At the opening, Monterey Park Mayor David T. Lau presented Zhang and Dube with certificates of appreciation. Peter Ho from the Hong-Kong-based SingTao Daily , which has a Los Angeles circulation of 30,000, also presented each of them with limited-edition plates produced in 1997 to commemorate the transfer of sovereignty.

In addition to the exhibition, USCI and the Center on Public Diplomacy are convening a scholarly panel on the subject “Hong Kong since 1997.” Participants included political scientists Stanley Rosen (USC) and James Tong (UCLA); syndicated columnist and UCLA communication studies professor Tom Plate; and attorney and former USC and Stanford adjunct professor of law Frankie Leung.

July 1st of this year will mark the 10th anniversary of Hong Kong’s return to China. On this very occasion, the Chinese Consulate, together with the US-China Institute of USC, holds this exhibition to commemorate this historical event.

First of all, I would like to extend, on behalf of the Chinese Consulate General in Los Angeles, our warm welcome to all of you present here tonight for this significant event.

10 years ago, when Hong Kong, after over 155 years of British colonial rule, returned to China, the world eyes were on the territory. There were excitement and blessings. There were also worries and even suspicions. Dire predictions and expressions of worry were the common currency of public discussion. The cover story of “Fortune” magazine in June 1995 blended the transition from Britain to China of sovereignty over Hong Kong as “The Death of Hong Kong”. As a result, many Hong Kong residents moved out of Hong Kong to other parts of the world.

Now, 10 years have passed. What has happened to Hong Kong? Has Hong Kong changed?

The answer is “YES”. However, quite contrary to the above pessimistic view, Hong Kong has changed not for worse, but for better. It has exceeded expectations of many predictors and proved more alive than ever. The principles of “One Country, Two Systems”, “Hong Kong People Administering Honk Kong”, “A High Degree of Autonomy” have been fully implemented. Honk Kong remains open, stable, prosperous, vibrant, widely entrepreneurial and full of vitality.

Many raised eyebrows at the achievements of Hong Kong SAR since July 1st, 1997. Just as the U.S. Consul General James B. Cunningham said at a public occasion on June 13, “The United States believes that ‘one country, two systems’ has been a success for Hong Kong and for China. The United States shares that optimism and congratulates Hong Kong on being on the path to success.”

Such a statement can be made evident enough by this exhibition we are inaugurating today. The 66 vivid photos, exhibited here and categorized in 4 aspects of culture, dynamics, lifestyle and innovation, offer us a glimpse of the overall development of the Hong Kong SAR over the past 10 years in the areas of economy, culture, science and technology, social life.

Looking forward, just as the March 2007 Time magazine cover portraying “A Vision for Hong Kong”, my vision for Hong Kong's future is also bright. With its geographical advantages, its prominent status as an international hub for trade, finance and aviation, and the sustained support from the Central Government, Hong Kong will remain to be the vital driveshaft of the global economy and one of the world’s societies with utmost freedom.

At this moment, I would like to express our deep appreciation to the USC, and the US-China Institute in particular, for all the efforts put into this exhibition. The Chinese Consulate, as always, stands ready for further cooperation with the University and the Institute to promote our common interests.

Please enjoy the rest of the evening. Thank you all.