Novelist Ai-ling (Eileen) Chang's collected papers, including short stories and prose as well as letters and drawings, were donated to USC and on display at Doheny Memorial Library.
November 3, 1997
Print 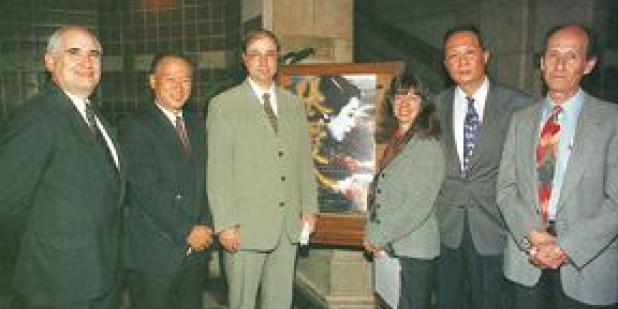 Above photo: Among those gathered at the reception in Doheny Library on Tuesday, Oct. 21, for the new collection were, from left, Jerry Campbell, dean of libraries and chief information officer; Francias Lee, former ambassador and now director general of the Taipei Economic and Cultural Office in Los Angeles; Joseph Aoun, vice provost for faculty affairs; Sarah Pratt, dean of instruction and curriculum in the College of Letters, Arts and Sciences; Dominick Cheung, professor, East Asian studies; and Otto Schnepp, professor emeritus, chemistry, and director of the East Asian Studies Center. In the background is a poster that features Chang.

by Elaine Zinngrabe
Originally published on November 3, 1997 in USC Chronicle

Her collected papers, which have been donated to USC and were on display at Doheny Memorial Library through last week, include 15 volumes of novels, short stories and prose, as well as letters, drawings and photographs of Chang herself.

Although she was critical of Chinese communism, Chang was not the rabid anti-communist that some held her to be. Even until recently, some of her works were banned in mainland China, primarily because two of her best-known novels were highly critical of communist practices. The donation of her collected papers, therefore, marks an important foundation for the University Libraries' Chinese literature collection.

Had it not been for the political division between Nationalist and Communist Chinese, she would almost certainly have won a Nobel Prize, said Dominic Cheung, professor of East Asian Languages and Cultures. Cheung spearheaded the effort to obtain the collection for the university after Chang died in seclusion in Hollywood in 1995.

"For the two years since her death, I have been trying very hard to get hold of Ai-ling Chang's manuscripts because she is such a renowned writer, a heavyweight writer, and I knew this would create an interest from students, researchers and the local community," Cheung said.

Chang's papers were displayed and honored at a well-attended reception in Doheny Library on Tuesday, Oct. 21. At the reception were university faculty, members of the Chinese community and Francias Lee, former ambassador and now director general of the Taipei Economic and Cultural Office in Los Angeles.

Most important among the contributed works is an original manuscript, Flowers on the Sea. An English translation of the Chinese book Sing Song Girls, it was originally written in the Shanghai dialect in 1894 during the late part of the Ching Dynasty.

Chang completed the 60-chapter translation while on a two-year fellowship to Radcliffe College in Cambridge. After her move to California, the manuscript was thought to be lost, but it was rediscovered by the Soong family in Hong Kong, close friends to whom Chang bequeathed her belongings. The USC Chang collection is made up of items donated by the Soongs and by Chang's Taiwan publisher, Crown Press.

Flowers on the Sea was written in the tradition of another Chinese classic, Dream of the Red Chamber, using a natural tone to tell the story. Flowers is a collection of short stories about the everyday lives of a group of courtesans - what they felt and what was reflected in their lives.

At the time of its publication, Sing Song Girls was not widely read because of the dialect in which it was written. Chang sought to make it more accessible through translation.

"[Sing Song Girls] was not popular because people could not understand it fully," said Lillian Yang, a USC Chinese bibliographer. "Translating it takes someone who knows the classic Chinese novels well, who knows Mandarin, Shanghai dialect and English - and if it is published, it will probably be studied in colleges and universities all over the U.S."

Chang herself served multicultural interests in her desire to reach a wide audience. "She possesses a multiple identity," Cheung said. "She was from Shanghai, she lived in Hong Kong, she was published in Taiwan and she stayed in the United States. She's almost an American writer, and this is why she tried very hard to have her works translated in English.

"I hope that the addition of this collection will inspire more research and more interaction for the study of modern Chinese literature in addition to the study of her writings," he added.

Chang began her career writing film scripts and romances. Although thesestories were sensational in style and content, their "intimate boudoir realism" was new in Chinese literature. Despite her labeling as an anti-communist writer, she was largely apolitical, and much of what she wrote were bitter love stories. A traumatic childhood, her first husband's betrayal and the death of her second husband made loneliness a theme in her work, as seen in this passage from Liu yan (1945), describing her memory of the war.

The carriage of time clatters forward. We ride in the carriage passing perhaps only a few familiar streets, but are frightened by the flames engulfing the sky. It's a shame that, in our haste, we only glance at passing shop windows, searching for the fleeting image of ourselves - we can only see our own faces: pale and faint, selfish and hollow and shamelessly stupid. Everyone's just like we are, but each of us is alone.

After moving to the United States in 1955, Chang became a recluse, refusing to meet the steady stream of prominent editors who sought her out. Even her editor in Taiwan had to communicate with her via fax, and sometimes waited days for a reply because she used the fax machine at a nearby grocery store.

In 1994, she accepted a literary award in Taiwan, but refused to accept it in person. Instead, she sent a group of photographs of herself, some of which were from her childhood in the 1930s. She also included one recent photo in which she looked so improbably young that she had posed for it with a newspaper showing the date.

"A collection like this ... allows us to see Taiwan, Shanghai and other parts of China through the eyes of someone who belonged to that culture at that time," said Sarah Pratt, dean of instruction and curriculum for the College of Letters, Arts and Sciences.

"This ability to perceive another culture and its own diverse terms is crucial to our understanding of the great richness of the world we live in," Pratt said. "At the same time, the Ai-ling Chang collection and Ai-ling Chang herself will become a part of the cultural mosaic that makes Southern California such a vibrant intellectual center. It is this kind of thing that brings us together to share our community and prompts us to understand that we really do belong to one world.

Left: Ai-ling (Eileen) Chang, Shanghai; at about 6 Right: Chang in a photograph taken in 1933.