Part 1 of the USC U.S.-China Institute documentary on cross-strait relations looks at economics-led rapprochement between the long-time rivals.
October 9, 2010
Print 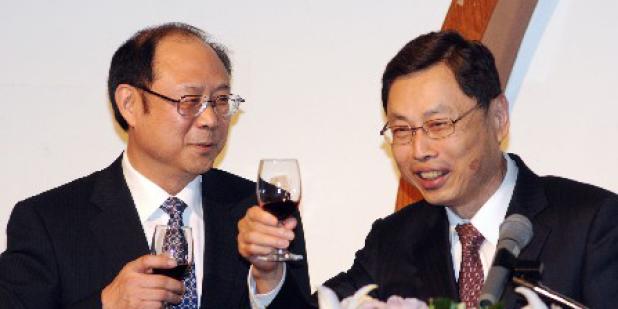 Economic ties between Taiwan and China have increased steadily and for several years now China has been Taiwan’s top trade partner (click here for USCI charts). Under the Taiwan President Chen Shui-bian’s administration (2000-2008) there was some progress in improving shipping and transportation links with the mainland, but on whole relations were decidedly cool. Chen’s Democratic Progressive Party suffered massive defeat in the 2007 legislative elections and in the March 2008 presidential contest the Kuomintang’s Ma Ying-jeou (马英九) trounced DPP candidate Frank Hsieh (謝長廷, click here for a USCI symposium on the election). Ma has worked to ratchet down tensions and the two governments have held several rounds of high level talks, forging major agreements to cooperate on law enforcements and product safety and, most important, to permit direct airline flights and to facilitate expanded trade. Taiwan leaders argue that the most recent measure, the Economic Cooperation Framework Agreement (ECFA) that went into effect on September 12, 2010 will not only improve Taiwan trade with the mainland, but will open the door to trade deals with other Asian governments (click here for Huang Kwei-bo’s 黃 奎 博 presentation on this at USC). Opponents led by Tsai Chi-chang (蔡其昌) worry that the ECFA will reduce employment in Taiwan and exacerbate the income gap.

This rapprochement has not been without significant bumps. The Taiwan government purchased several weapon systems from the United States in late 2008 and in early 2010 (click here for a US-China Today article on arms sales.) In each instance, the Chinese government protested this as an intrusion into its domestic affairs and a threat to its national security. Taiwan’s Ma insists the arms sales help his government in its ongoing negotiations with the mainland.

This new documentary from the USC U.S.-China Institute explores these issues and includes interviews with political advisors to Taiwan’s two major parties, scholars from China, Taiwan, and the United States, and business people who are on the forefront of the combining Taiwan capital and know-how with Chinese labor to succeed in the global marketplace. Mike Chinoy, USCI senior fellow, and Craig Stubing, USCI multimedia editor, produced this report. [CD]

Click here to view the discussion of the 2012 Election